I was such a lazy sot this morning. I was up at 0615 (thanks to a Monkey elbow in the ribs), but sat around reading blogs and drinking coffee for an hour before developing the will to go outside. It's not like it was windy or wet, or even particularly cold. It was chilly - around 10 degrees - and still. I think my problem is having an office at home with no view - I can't see the sky from my desk, and that affects my motivation to move.

Once I did get moving, the sky was quite spectacular - those clouds are almost an upside-down ski field. 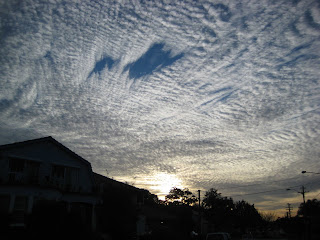 I hit a major bump on the road on the Leichhardt side of the Bay, and unbeknownst to me, my headlight bounced right out of its cradle and landed on the road (it was light enough to not need it to be switched on). There was a pack of half a dozen riders behind me, and they were kind enough to pick it up, catch me up and hand it over. That saved me at least a hundred bucks, and the prospect of riding home in the dark. 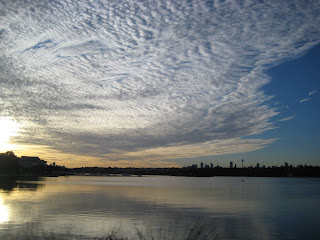 A similar thing happened on the way home - I crashed into a pot hole in Kent St, and heard a clatter behind me. I checked that I still had everything - pump, water bottle, wallet, camera and phone - and could not work out what had made that noise.

At the next set of lights, a cyclist pulled up next to me and told me that my back light had departed company with my bike, and the bloke coming up behind him had picked up my light! The light had fallen apart, with the base remaining attached to my bike, and the blinky bit and batteries hitting the road. All I got back was the blinky bit - the batteries had speared off somewhere else, so I had to ride home with no tail light. I have a spare front light in case my big rechargeable battery goes flat halfway home... now I need yet another tail light in case the primary light meets a bad end. Where will this end? So much for high speed, low drag.

That's two big favours other cyclists have done in one day - I must have built up some good karma somehow. Perhaps it's sending those care packs to the troops.....

And here we have the city at sunset - yes, it really was that pink. I have not fiddled with this photo at all. I think smog helps. 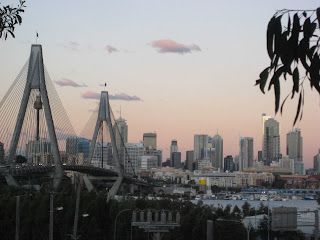 One thing that did bug me today is that I had no grip in my hands. My gloves kept on sliding around on the handlebars, and nothing I did would stop it. I normally change grip once a minute or so in order to stop my hands and forearms from going numb - I have racing handlebars, so one minute, I'll grip them using the horizontal part of the bar, and the next I'll change to the forward poking part. It didn't matter what I did - my hands kept sliding around, and I had trouble pulling on the brake levers when I needed to.

I initially blamed the gloves, as they were the full-fingered set. They lack the palm padding that the fingerless gloves have, and the baby seal skin that lines the palms of the fingerless gloves generally grips the handle tape like glue. However, when I swapped gloves for the ride home, the fingerless ones were just as bad. It's as if the handlebar tape has suddenly lost all its stickiness; or my forearms have suddenly developed a bad case of piss weak.

Tomorrow morning will be interesting, when I ride again at dawn. I am back to checking the weather forecast every night before bed - gusty winds tomorrow. Not very warm either. I feel major ball shrinkage coming on.
Badly proofread by Boy on a bike at Thursday, July 02, 2009

Do some stretches for your arms...
I'll see if I can find them.

The nerves in your shoulders which run under your arms and down to your fingers are tight. That's why you're getting pins and needles.

Not sure where the exercises are, I suspect in the boxes of work crap I bought home, I'll check.

Pog's Pizza with Boy and J and... sheesh!

I love the pix!