An interesting Monkey photograph, this time featuring Monkey, flying between beds in the cheapest hotel in the Southern Highlands. Our room was so cheap, it featured 30 year old decor and 30 year old beds. Our family of five put up with it for two nights because, well, it was cheap, and we intended to spend very little time actually occupying this room. 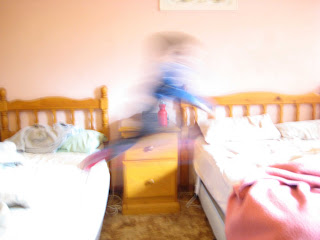 It was so small that the beds were not very far apart. Monkey spent the better part of an hour leaping from bed to bed to bed, and I spent some of that time trying to photograph him in mid-air. My digital camera is great for photographing many things, but not flying Monkeys. I fiddled with the manual setting mode, but could not get it to agree to take a photo at say 1/100th of a second or faster.

There is about 1 day in 365 that I pine for my old SLR camera, but even then, that's only for about 5 minutes on that one day of the year. The rest of the year, I put myself in the hands of very cunning Nipponese engineers.

If we were at home, Monkey would of course have been yelled at very loudly for jumping on the bed - since he has already broken one doing just that. It's amazing how attitudes change once you check into a hotel.

I have to say that bed jumping is marvelous exercise for young kids. Once he bombed out for his afternoon nap, we couldn't get him up. We almost had to resort to feeding him chocolate in his sleep in order to rouse him. We are such good parents......
Badly proofread by Boy on a bike at Sunday, July 12, 2009

Thanks for the smiles, love it!

Whenever we'd transfer or travel, we always took full advantage of the motel beds. "Cleverly Disguised Exercise" is still a legend in our household, to be told one day to BEEootiful Granddaughter.

Your child is Monkey...my granddaughter is Bug - from LadyBug, which morphed into StinkBug, but Bug is what I call her, Pixie is her name when I write about her.