I still don't get it 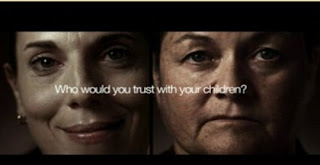 I must be thick, because I still don't get these Reconciliation Australia ads. I think they are supposed to encourage us to be colour blind, but how is that possible when the SMH keeps throwing stories like these at us?

The new data from the Australian Bureau of Statistics (ABS) found life expectancy for Aborigines was 67.2 years for men and 72.9 years for women.

This is about ten years less than non-indigenous Australians.

"Reducing the life expectancy gap (is) both a national priority and a national responsibility," Ms Macklin says.

The Rudd government is being urged to take control of Aboriginal health from its state and territory counterparts.

Australian Medical Association Northern Territory president Peter Beaumont said efforts to close the gap were being stonewalled and a massive injection of health dollars had made little difference on the ground.

More than half the Aboriginal male inmates in prison for violent crimes are suffering from post traumatic stress disorder, an academic says.

And without effective intervention, the "stressors" for the disorder will be passed on to other generations, perpetuating the cycles of crime.

Dr Caroline Atkinson said most violent inmates had suffered from some form of family violence, alcohol and drug use, as well as profound grief and loss

Australian of the Year Mick Dodson says ensuring indigenous children attend school is one of the keys to improving Aboriginal health and closing the life expectancy gap.

The fact 30 per cent of indigenous adults lacked basic literacy had a "significant impact" on their health, he said.

INDIGENOUS Australians are 10 times more likely to develop kidney failure, but a study of more than 2200 children in NSW has failed to find any risk factors that predispose Aborigines to serious kidney disease.

Racism, discrimination and a lack of employment have contributed to a spate of suicides in a small West Australian town, grief-stricken Aborigines say.

"If we had the police to just quieten down the domestic violence and that, then that would probably help," he said.

Mr Calma said after the meeting that racism was a major issue alongside the need to encourage indigenous students to complete high school, health concerns and interactions with police.

Legislation designed to protect children from sex abuse in the Northern Territory look set to be "tweaked" because of a public outcry.

The laws formed part of the Labor government's response to reports of widespread sexual activity by minors in remote Aboriginal communities.

In the six months to December 2006, 20 per cent of children were anaemic. A year later the figure had increased to 36 per cent, and by June last year it had reached 55 per cent, where it stayed in the last six months of 2008.

Since compulsory income management of welfare payments began in the region in late 2007, there have been documented instances when it affected people's capacity to buy food. This included diabetics, who with no local store access were unable to access food for weeks at a time. Their response to this situation was to sleep until food became available.

There was strong agreement about the need to protect women and children from violence and to improve the socioeconomic position of Aboriginal families between those who designed and welcomed the intervention and those who questioned its methods.

The SMH is one of the soggiest papers in this country, barring those total nutbag rags like Green Left. It embraces reconciliation with a passion, and if the good burghers of this paper had their way, we'd all be relieved of a good chunk of our wealth to compensate the "original inhabitants" for something or other.

Surely there must be terrible flops in the Aboriginal arts world. Some productions will be great, others mediocre and some awful disasters. Just look at what whitey does with the output of Hollywood - for every Patton we get a Rendition. For every Titanic, we get a stack of Waterworlds. When I see that an art critic at the SMH has dared to pan an Aboriginal show, I'll know that reconciliation is within our grasp.

Anyway, my point was that if you read your way through that crop of thoroughly depressing stories that I have linked to, you'd quickly gain the following impression of Aboriginal people in Australia - short lived, violent, unhealthy, criminalised, unemployable, uneducated, suicidal people who like raping kids, eating badly, smoking, drinking to excess, bashing women and then offing themselves once they are finally locked up after a life of crime.

That's not me speaking - that's our wonderfully liberal SMH laying on the description with a trowel. If you were constantly fed a diet of news like this about Aboriginals, wouldn't you start crossing the street when you saw one walking towards you, let alone thinking about employing one, or wanting to live next door to one?

Personally, my biases are few. I like nice people and hate fuckwits. I don't care if you are a half Laotian/half Ukrainian lesbian dwarf - if you are a nice person, you are a nice person. If you're a fuckwit, I'll be reasonably polite, but don't expect me to like you or employ you because of all the labels that you've attached to yourself. In my world, you get by on your ability and your personality.
Badly proofread by Boy on a bike at Friday, July 24, 2009

I'm reconciled that there'll always be professional victims and bludgers sucking off the taxpayer teat and blaming everyone else for their woes.
Look at those stories quoted above.

Whose fault is it that your life sux? Not mine.

WV: indpliki
One of those Indian instruments with strings...