I just happened to be perusing the bike plan of a neighbouring council when I found this paragraph:

Fifty seven (57) of the recorded bicycle crashes involved a collision between a bicycle and another vehicle, predominantly cars. The most common types of crashes recorded were:
A motor vehicle side swiping a bicycle (12);
A motor vehicle emerging from a driveway or footpath impacting with a bicycle (10);
A bicycle and another vehicle impacting from adjacent directions at intersections (9);
A bicycle and another vehicle impacting from opposite direction (7);
A bicycle colliding with a vehicle door being opened (7); and
A bicycle losing control on a carriageway (4).
There were no recorded fatalities during this period.
The above crash types give some indication to the main issues that cyclists experience in the Leichhardt LGA with side swiping (left turn across straight through cyclists), driveway exiting and intersection crashes the most prominent.


This data is now 6 or 7 years old, but it matches with more recent UK research that suggests that motorists are at fault in the majority of bike crashes. In this sample, cyclists are clearly at fault in 4 out of 57 crashes - or 7%. The rest are the sort of stuff I narrowly avoid every month - motorists not paying attention when opening doors; motorists in a hurry overtaking cyclists and then immediately turning left in front of them (or into them); motorists turning across oncoming traffic choosing to not give way and hitting cyclists coming in the opposite direction, or screw ups at intersections when motorists go through roundabouts, stop signs or give way signs without giving way to a cyclist that has right of way.
Badly proofread by Boy on a bike at Saturday, December 28, 2013 2 comments:

Thank goodness the holidays are here and I don't have to ride into town for a while. I've seen more than enough silly people roaming the streets over the last week to last me a life time.

For starters, there was the very silly cyclist who decided to run a red light. I was going one way, he was going the other - and I could see that sitting right behind him as he approached the lights was a motorcycle cop. He didn't notice. I thought he was going to stop for the red - and I imagine the cop did too as he was gobsmacked when the cyclist in front of him just tooled straight through the red. It took him about 5 seconds to blink away his surprise and find his lights and siren.

Then there were all the silly pedestrians. They weren't doing silly walks, but they were walking (or running) in silly places. Like running across the road right in front of me as I was bearing down on them at high speed. After a few close encounters with the moronic kind, I gave up trying to ride quickly through town and throttled back and took it easy. There is a form of madness that infects people at this time of year and it causes them to do silly stuff they would not ordinarily do. I'm just glad I survived through it.

And didn't get a ticket.
Badly proofread by Boy on a bike at Saturday, December 21, 2013 2 comments:

Mobile phones will be the death of me

I'm heading home. My (very) short warm up is done. I now have a bike lane to ride in, and it's time to crank the pedals a bit harder and lift the pace. The only thing stopping me is a car in front which is speeding up and slowing down and swerving far enough to the left to cut into the bike lane a few times. I hold back, wary about passing a driver that can't hold a straight line or a steady speed. I'm doing 33km/h and am itching to boost it to the next level.

Then I think, "Screw it", and I stomp on the pedals.

Half a second later, I am grabbing the brake levers for all they are worth. The back wheel locks up. I feel the rear slide slightly to the right - but I have it under control. My sole aim is to avoid smacking into the back of the car - the driver has suddenly braked and done a hard left-hand-down and pulled up in the bike lane. It's a no parking zone - what the hell are they doing? No indicator. No warning. No checking the mirrors or looking over the shoulder. Just a rapid tossing of the car in my direction. Having a bike lane is nice, but the only thing separating me from 1.5 tons of metal is a faded unbroken single white line. It's days like this that I wish for a bit of a concrete barrier. Clearly, the painted "line of death" isn't keeping the cars out.

I pull up. The car has stopped as well. I look over my shoulder for cars behind us, then slowly pedal along the driver's side.

The driver has one hand and both eyes on her phone. It's down by her right leg in the "you can't see my phone" position. I guess she got a text message that she just had to stop to reply to. And no, she wasn't a teenager - she was about my age.

I resisted the urge to yank open her door, give her an earful of observations about her driving skills, parentage and sexual habits before ramming the phone up her date, and slowly pedal off. The pulse rate is a elevated a bit, but not that much. I'm getting too used to this. Once, it would have scared the poo out of me and I would have been left shaking and very stressed. Now, I congratulate myself on my calmness and not punching the living daylights out of the driver.

And then I floor it. The adrenaline gives me wings. I am going 40km/h before I know it, and not a single car passes me over the next section of road before the traffic lights. I am flying - doing my best to put a lot of distance between me and that moron. I don't want to run into her again today.
Badly proofread by Boy on a bike at Wednesday, December 04, 2013 3 comments:

Overdoing it a bit

I certainly haven't been overdoing the blogging of late, but I think I might have overdone the cycling a bit (which would have led to a lack of blogging).

I haven't been doing more kilometres per day - but I have just had a short break after riding 3 weeks straight. Due to a few things happening, I ended up having to ride every day. Twice a day. The rides might be relatively short (15km each way generally), but the impact of doing 15km two times per day for 21 days in a row adds up after a bit - especially since I do a good chunk of those 15km fairly hard. If the air is calm and the road is flat and the traffic allows and the legs and lungs are up to it, I'll tonk along at a nice 37km/h for as far as I can. I'm pretty happy to have reached that cruising speed over slabs of my commute - you don't get passed often at that pace.

I'm not getting any younger, so the lack of recovery between rides takes its toll after a while. In week three, I was almost falling asleep face down in my food at the dinner table, and I crashed on the couch at the slightest opportunity. I found that when I got home, I had to stay on my feet if I wanted to stay awake. Constant movement and activity were the only things keeping my away from the Land of Nod.

Which made it pretty hard to blog. If I had tried to blog, most entries would have looked like this:

That's what you get when your nose and forehead impact with the keyboard.

I had the weekend off. I can actually sit here and type without falling almost instantly into unconsciousness. That's a weird feeling.
Badly proofread by Boy on a bike at Monday, December 02, 2013 2 comments:

No one does this to me when I'm in my 4WD

There's an intersection that I go through twice a day on my bike where driver behaviour is at its worst. I'm going straight ahead, but most drivers coming towards me are turning right. That means I have right of way. The intersection has lights, which I have not bothered to draw as this taxed my drawing skills to the max. When I go through this intersection in my car, drivers turning right stay behind the line and don't nudge their way out into my travel path. 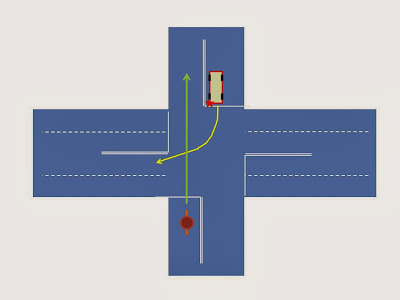 When I'm on the bike, it's a different story. Buses wait for me. Trucks wait for me. Plenty of car drivers wait for me, but there are also quite a lot that decide that since I look skinny (ha ha), I don't need much road space, so they creep out into the intersection and block half my lane. I have to swerve to the left to get around them. I should point out that due to the physical makeup of this intersection, I can actually get across it faster than most cars from a standing start (there's a big, deep fuck-up front bumper/sump removing gutter that they have to crawl over - but it slows me down not at all). So the cars are not pushing out because I am taking my time getting across the intersection. If there is a car behind me, they'll stay put. They only emerge from their burrow when I'm on my own on my side of the intersection. 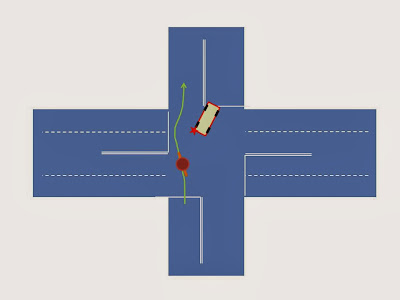 Then there are the tradies - the fuckers in utes - who decide that they aren't going to give way to a cyclist, and they plant it when the lights go green and just tear across without any regard for me. I'm pretty good at spotting these clowns whilst I'm sitting at a red light, so I haven't been skittled yet - but the close calls have been legion. 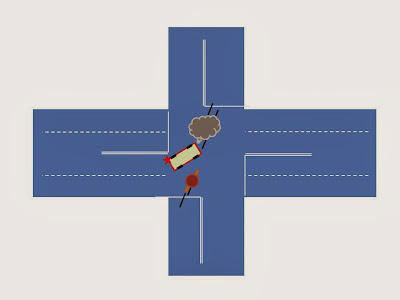 As I said in the heading - no one dares do this to me when I travel the same route in my 4WD. Some drivers clearly do it because they know they can push cyclists around with their cars and generally get away with it. I really don't want to get clobbered by them because I reckon that if I am run down, they'll do a runner.

Most of my driving has been done in fairly heavy vehicles with normal profile tyres - as in a 75 profile. When a tyre starts to go flat, it's pretty obvious with a heavy car and a high profile bit of rubber. The sidewall bulge sticks out like dog's balls, braking performance suffers, steering can be heavy and you can even feel a wobble through the wheel or the seat.

I got the shock of my life yesterday when I took a little car to the petrol station for a top up. There was an air filling station in front of my spot, so after filling up, I drove over and checked the tyres.

They were 1/3 to 1/2 around where they should have been. I couldn't believe it - the tyres showed no visual sign of being underinflated, and they're only a few months old. When driving around, the handling of the car gave no indication of flattish tyres - I'm not sure why that should be the case. Light car? Good suspension? Well built tyres? I know instantly when the pressure is getting low on the other car - it provides good feedback - plus walking around the car and eyeballing the tyres is a dead giveaway.

As soon as I got home, I ordered some of these. They cost me less than five bucks delivered. I don't know how good they'll be, but I'm going to give them a crack. 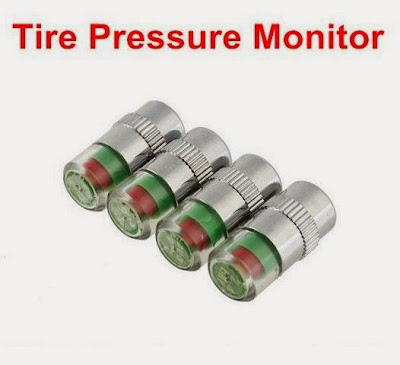