I forgot where I worked this morning. I found that I had missed my usual turn off once I reached the city and was heading for an old office. My brain is going soft.

When I was at uni, a friend who will remain nameless decided to drive home after a party and he ended up forgetting where his current house was and started driving towards his old one. He eventually figured out the mistake, but was too drunk to turn around and make it to his new place. So he pulled over on the wide grass island between two major roads and had a nap. I think he woke up about 8.30am. When he stuck his head up, he found he was surrounded by several lanes of amused commuters trapped in traffic on either side.

At least he had the excuse of consuming too much of my double strength home brew. I'm clearly turning into a doddery old fart.
Badly proofread by Boy on a bike at Wednesday, November 28, 2012 No comments:

A load of cobblers

I cooked a peach cobbler for dessert tonight. Incredibly, it turned out almost like this photo - a first for me. I've made the Jamie Oliver version of a fruit cobbler on many occasions - his version uses buttermilk in the topping. I reckon this version is much better - I prefer a drier, crunchier topping.

If there is one thing I now look out for all the time, it's pairs of female walkers who present a continual threat to safe navigation.

For some reason, many pairs of female pedestrians walk right down the middle of the path, denying everyone the ability to get past them in either direction.

The really amusing part is when you ride up behind them and ring your bell. A sane person would expect them to both move to the left and safely get completely out of your way. An experienced rider like me knows however that in many cases, the one on the left will veer right and the one on the right will veer left and they'll crash into each other in the middle of the path and then rebound in confusion - which means they'll be blocking the entire path again.

Which means you never tear up behind two women. You always brake and get ready to really stand on the brakes. It's ok with blokes - almost all of them will break left; and if they are walking with a female, they'll usually grab the female by the arm and drag her in the correct direction.

I really don't understand why so many women totally fail to grasp this simple concept.

I guess that makes me a misogynist.
Badly proofread by Boy on a bike at Tuesday, November 27, 2012 3 comments:

I ride, therefore I blog

Yes, I've been quiet of late. No, I haven't been knocked over by a car (again). It's just that I've been busy with a lot of things, and blogging is something that I only ever get to do after a long list of daily chores is completed.

The muse has also run a bit dry of late - and I blame a lack of riding. Writing a blog entry for me is something that happens in two distinct stages. The first (and longest) part is the thinking. The second (and fastest) bit is the actual typing. I do most of my thinking on the bike (when I'm not dodging idiot drivers). Therefore, if I'm not riding, I'm not thinking. And that means no writing.

Or as they put it in the army - "if you don't eat, you don't shit. And if you don't shit, you die". Substitute riding and thinking and blogging for a few of those words and you'll get what I mean.

Regular riding should recommence shortly. If thinking also manages to kick off again, then so will the blogging.

In the meantime, speaking of eating and shitting - try this recipe for breakfast. Instead of blogging, I'm going to retire to the kitchen to make some in preparation for tomorrow.

As for riding and thinking, have a read of this post on mountain bikes - and why they are the work of the devil.
Badly proofread by Boy on a bike at Monday, November 26, 2012 3 comments: 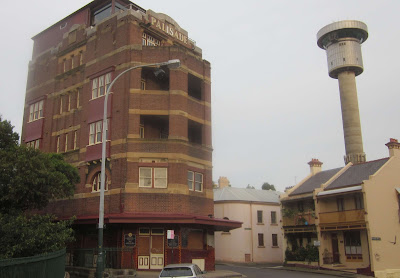 I had one of those "WTF" moments last week when I took a bit of a detour through The Rocks. I've ridden under the Harbour Bridge a few hundred times - it was time for something new.

My detour took me past the Palisade Hotel - to my shock, it was boarded up. Apparently it closed for renovations in 2009, but by the looks of things, it has never re-opened.

What shocked me is how many years have passed since I was last up that way. I had a few lunches and dinners there in the old days - it had a great restaurant with fabulous harbour views. To see it boarded up rammed  home how many years it's been since BK (before kids) - we used to come into town to see a play every few months, and this was a favourite place for a meal and drink before the show.

Sheesh. Time has moved on. No wonder my knees hurt.
Badly proofread by Boy on a bike at Sunday, November 11, 2012 1 comment:

A sample question - but my favourite is question 12.

The horror of the Kent St bike path

You might expect that as a cyclist, I'd have nothing but wonderful things to say about the bike paths that have been springing up (or laid down) around the Sydney CBD.

It's been a long time since I rode up and down Kent St (which leads to that Harbour Bridge), so on a whim, I decided to give it a go this week. I wasn't going anywhere in particular - I just added a few miles to my journey to increase my workout.

As an aside, I work with a bloke who has a 20 kilometre commute. He'll sometimes leave home really early and actually ride 40km to work, or leave work a bit early and take a 60km route home. He's nuts by the way.

I used to live north of the harbour, so trundling up and down Kent St (pre-bike lane) and onto the Harbour Bridge was a daily occurrence. The bike lane was built years after I moved to the outer limits of the civilised world (the inner west). Kent St was never a pleasant place to cycle - steep hill, poor road surfaces, merging traffic, hordes of idiot pedestrians crossing in the wrong places whilst yapping on their phones and not watching where they were going and angry drivers suffering in grid lock as they waited to get onto the bridge approaches.

Not much has changed, except that there is now a two-way bike lane down the eastern side. The hill is still there. The idiot pedestrians are still there (although their phones have mysteriously gotten larger, as have the hordes). The poor road surface has been painted over with some extra-super-slippery green paint. The angry drivers and grid lock have gotten worse.

The big plus is that cyclists are no longer funnelled into a bad place to be by merging car lanes - we have our own green lane now. However, the bike lane is crossed by the drive ways into numerous office blocks, and on the day I rode through there, a driver was either parked across the bike lane (waiting to get into the grid locked traffic) or one drove furiously out of the car park from my left without considering that cyclists might be trundling down the hill on the green painted bit of stuff out of the front of their office.

Which is why I avoid Kent St entirely and take a much longer route around the western edge of the city. It's flat, it's fast and there's 1/10th the number of traffic lights. Did I mention that I spent more time waiting at red lights on Kent St than riding along the bike path?

With cycling, the direct route is not always the best. I quite often find that the indirect approach is easier, safer - and in this case - probably a lot faster. Going from A to B in a straight line can often be the worst possible option. And in my case, I like taking the longer route because it means more calories burned.