Having fun with numbers

The MSH (SMH) ran a story today on the Gravy Plane - how our retired politicians are using their free travel passes. They kindly posted some PDF's of who has been doing what, so I decided to analyse the numbers to see if anything stood out.

For starters, providing data in PDF format is beastly, and it required some massaging to get it into Excel. By massaging, I mean getting the bloody data into the right cells, not fiddling with the data IPCC style. For that reason, I only worked on those who spent over $50,000, which conveniently happened to be those on the first two pages. There are 10 pages of data - I could not be fagged to massage the bloody lot. Let's just go with the frequent fliers.

I plotted the data using simple X-Y scatter diagrams. The pinko Labor types were first - note that I have fixed the scales for each party at the same maximum values so that the charts are not distorted via different scales. Nice fit on the R-squared value. The trend line is a 2 factor polynomial. The uppity-down axis is the number of flights each member has taken, and the cross-the-bottom axis is the aggregate value in $,000. 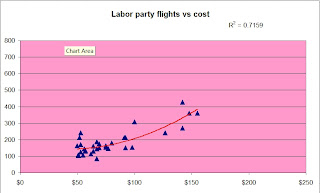 Then come the Tories - the best fit trend line was a straight line rather than a polynomial, and the R-squared is a disappointing 0.54. 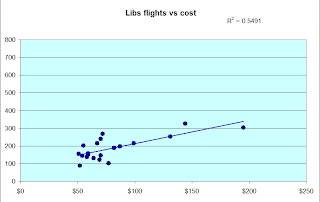 Whoa, check out the Nationals. That massive outlier is Ian Sinclair, who just happens to sit on the board of that fake charity that I had a look at a few weeks back. If he has been flying down to Sydney for board meetings, then the charity should foot the bill, not the taxpayer. 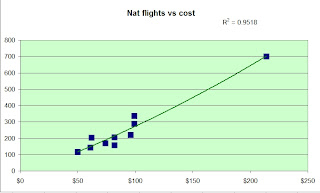 I tried getting fancy by using a radar plot to see if anything jumped out at me, but apart from Sinclair, the plots are all fairly similar. 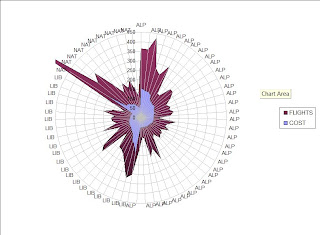 I then tried a different tack, analysing them by state rather than party. Since blogger renders tables like crap, I am doing this as dot points. The first number is how many members that state had in the top frequent fliers, and the second is the average cost for the top fliers in that state:

What can we say about that?

WA tops the league in cost, as you might expect given the cost of flights from there to anywhere else.

What the hell is it with Tasmania though? They have a minuscule population, not a lot of members in the reps, yet they have more members in the top frequent fliers than WA. Are they that desperate to get out of Tasmania?

Queensland - big state, not a lot of members in the top list. The top member on the list comes from Townsville, which is a long way from anywhere. A quick check on the Qantas web site shows that a flight from Townsville to Sydney is more expensive than one from Perth to Sydney. It's a loooong way.

Then there is South Australia. Crumbs! 11 members doing their best to get out as often as possible, averaging $83,000. I guess they were just popping across to Melbourne for a civilised weekend.

Victoria - big state in terms of population, yet only 1 more member in the top list than South Australia. Yet they are still expensive - why would anyone living in Victoria want to go anywhere else? I can understand people in Tasmania and SA wanting to split, but Victoria tends to be pretty nice.

NSW tops the list as expected, having the highest number of ex members. The average is pulled up a bit by NSW having Ian Sinclair with his snout right in the trough, and then the next highest is the globe trotting Tim Fischer, who lives in the middle of nowhere.

The fascinating thing is that the 4th biggest spender for NSW is Janice Crosio, who was the Member for Prospect - which is an electorate in western Sydney. The others are all Nationals who live out in the boonies. Janice Crosio is just down the road a bit from me. She took 154 flights to total up her $98,000, whilst Noel Hicks, who lives in the sticks as the member for Riverina-Darling, took 336 flights in order to spend $99,000 - a grand more than Janice.

I'd be interested to see where she has been zooming off to.
Badly proofread by Boy on a bike at Thursday, July 02, 2009

A good breakdown, BOAB, and interesting that Sincers happened to pop up on that charity board you were talking about.