Three flats in one week. Clearly, something is askew in the heavens. I will have to read the entrails of a chicken by moonlight to divine what is amiss in the cosmos.

I was planning on riding yesterday, but that was kiboshed by J being sick. Before I could go today, I had to change the back tube, which was still flat from my ride home on Friday.

Changing a tube at home is easy on a sunny day. Find a picnic chair, gather ye tools and implements and settle if for a quick spot of tube off/tube on. My weapons of choice are a powerful stand-up pump, three tyre levers (one broken), a pair of latex gloves (to avoid the dreaded black finger) and a nifty tool for getting the last bit of tyre bead back over the rim when all is done. Oh, and a spare tube - either new or patched. 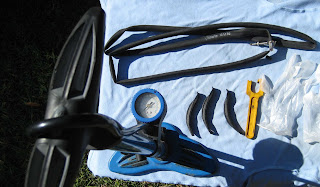 My latest disaster - the core of the valve blew out as I removed the pump several miles from home. It came out with such velocity, it would have done significant damage to any eyeballs in the vicinity. Never had this happen before. 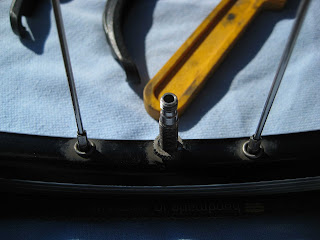 My nifty, $25 bit of yellow plastic that is great for aged finger and thumbs. I use kevlar reinforced tyres, and they stretch in the same way that flak jackets stretch - hardly at all. The blokes that work in bike shops who change flats all day long have thumbs the width of my wrist - they flick tyres back on with seemingly little effort, whilst I strain enough to develop a hernia. I found this bit of plastic advertised in a magazine, and bought it over the internet. 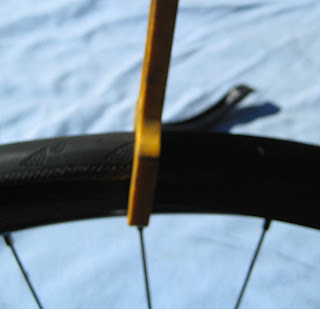 One end hooks inside the bead of the tyre, and the other side rests on the rim. You simply lever the bead up and over the rim. Simple. Getting it off afterwards is not always that simple, as the hook bit gets trapped under the bead and is reluctant to depart. 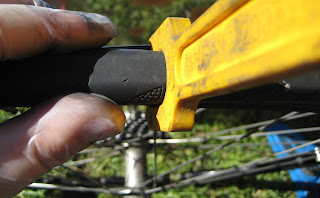 After changing this tube, I forgot to put my road pump back on the bike. So of course I got a flat after going over some broken glass 15km from home. I swapped the tubes over, and then waited for another cyclist to go by. Most cyclists will stop and ask how you are if they see you with your bike upside down on the side of the road - it's like flying a flag upside down.

I had to wait about 15 minutes for someone to come past. I thought the path I was taking was well patronised - I always see other cyclists on it - but perhaps they were all in bed after staying up all night to watch the first leg of the Tour de France (I taped it). A very nice bloke of 62 pulled over and helped me out - he was riding into town where he was going to spend the afternoon assembling bikes in a bike shop. We rode together for 10 minutes or so and had a nice chat - he used to race when he was younger, and seemed to know every prominent cyclist in NSW personally.

It was a pleasure to drift along with him, although I had to leave him in the end as I was freezing. When I left, my bike thermometer read 23 degrees - beautiful weather - so I dressed light. Within 10 minutes, it was reading 17, and I was starting to feel nippy. I had to raise my flat cruising speed to 32-35 km/h to keep the blood flowing to my extremities. Even now, my toes are still chilled. He was tonking along at just over half that speed, and I could feel the icicles developing from the sweat that had previously been running down from my brow.

In a way, it's a good thing the flat cut my ride short - my legs were totally out of puff. The other day, they were zinging along with all turbos screaming. Today, the battery was utterly flat. No signal available. Out of service. It is so much nicer to be sitting inside a nice warm house - except that the bike needs a thorough degrease and clean.

Ah well, time to put the degreasing clobber on. Ciao.
Badly proofread by Boy on a bike at Sunday, July 05, 2009

....except I think there should be a button to increase the power of the lasers to burn holes in black BMW drivers tyres after they almost run you off the road.