To start with, a haircut for the bushes that line part of the path around the Bay. These things tend to get a bit unruly after a while, and take over the path. They're also the kind of bush that has sharpish leaves, so racy past them too closely can result in paper cuts to the lower legs. I just wish council would work out a way to do this sort of thing without parking their bloody ute smack bang in the middle of the bike path! 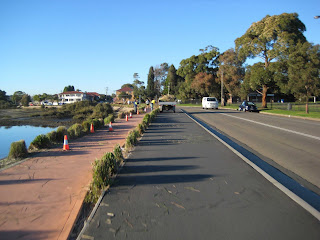 A fellow commuter, rugged up against the morning chill. Riding at this time of the year can be a pain, because you have to dress for two seasons. In the morning, with the temperature in single digits, it's jacket, full length gloves, leg warmers and shoe covers. In the afternoon, when the temp can climb to 21, it's time to strip down to summer kit. A backpack is essential to carry all the clothes that are cast off from the morning commute. This is a big difference between commuting and just going for a ride - when going for a ride, it's likely that most of the riding will be done at a reasonably constant temperature (either freezing or warm), so you dress appropriately and don't have to worry about taking extra clothes or storing the bits you've had to remove. 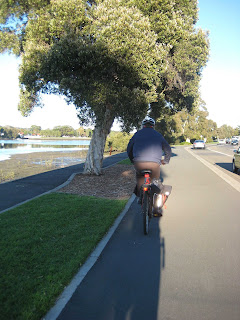 The gathering of a pack in Lilyfield. Riders start to coalesce into a stream as we approach the ANZAC Bridge. The guy just in front of me was checking behind him to see if I was going to overtake - he knew I was there, and was polite enough to make way if I wanted to move forward. I was just jinking around behind him trying to get a good angle on this shot. Note the two big panniers on the back of his bike - a serious commuter, or he uses the bike for shopping. 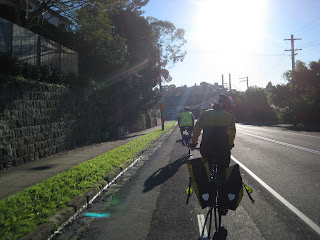 A WTF moment on the ANZAC Bridge. As I went to overtake this lady, I went, "WTF?" 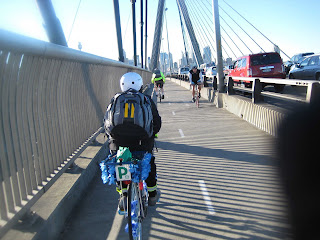 In case you failed to notice what I am on about - the P plate and the blue fluffy stuff all over her bike. 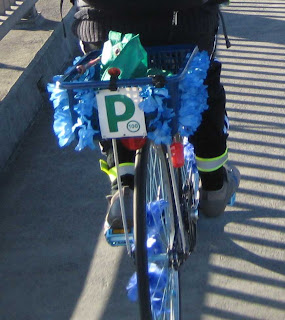 A pack really starts to form as we wait at the lights before getting onto the Pyrmont Bridge in front of us. There were more riders to my left, and a queue behind me. At this point, the bikes gaggle in the middle of two lanes - the lane to my left is used for cars turning left, and they have an arrow, so we cyclists politely queue to their right so they can turn left without us getting in their way. From here, it is a mad dash across the intersection and then up two "pram ramps" to get onto the path across the bridge. There are not enough ramps for the numbers of cyclists at peak hour, so bikes are usually go everywhere once the lights turn green as we race for a ramp. A few idiot pedestrians always decide to cross the road and walk up the ramp, blocking the path for a horde of speeding cyclists. Some people have no brains. 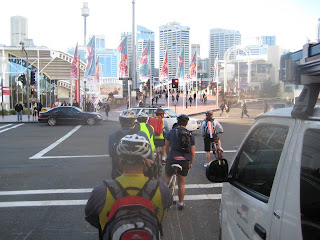 Cyclists are asked to keep their speed down on the Pyrmont Bridge, and most do, ambling along in a low gear. A few always want to sprint across the bridge, which is madness at most times of the day. This photo shows a very rare event - no pedestrians in front of us. The only reason I could take this photo is because of the dearth of pedestrians around us - normally, I am dodging too and fro to get around the masses of people walking across here. 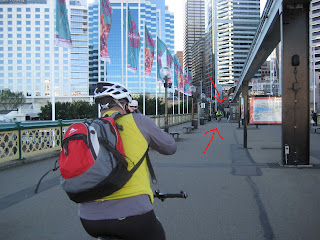 The bloke in front of me is of course being a mungbean and is talking on his phone as he rides. Way up in the distance in front of us, denoted by arrows, is the rest of the group that we were following. In the morning, the sensible thing for us cyclists to do is to get into single file and follow each other across the bridge like a snake, weaving our way through the pedestrian traffic at about 20km/h. The trick is not to break the snake, but this guy did just that when he answered his phone and slowed down. Once the snake is broken, you have a tougher time picking a line through the meandering crowds, and that is even tougher when you have one hand on the wheel and the brain in neutral!

What I hate about the pedestrian traffic on this bridge is its inconsistency. You'd think that it would keep left, so that everyone going into the city would be on the northern side of the bridge, and everyone walking to Pyrmont would stick to the southern side. But no, that would be too intelligent. People walk all over the place, and not only that, they fail to walk in a straight line across the bridge. About 1 in 4 walk in diagonals as they cross this bridge. The only thing that would complicate matters further would be skydivers landing on the bridge, making it a 3 dimensional moving puzzle.
Badly proofread by Boy on a bike at Tuesday, July 28, 2009