Walking, running, cycling, rollerblading or whatevering round The Bay Run is a nice way to spend a sunny day. The route circumnavigates a body of water, which is the Bay, and people like to run around it, which I guess is why it is called the Bay Run. It's about 7km long, and goes through 3 different Councils.

If there is one thing that I have learned over the last few years, it's this - councils hate each other with a passion. Being on the border of say Canada Bay and Ashfield must be like living in the Rhineland circa 1939. As far as standardisation goes, if councils were responsible for building railway lines, we'd have 150 different gauges in Sydney alone. The one problem the Bay Run has is that instead of it being a nice, consistent slab of concrete for its entire length, it's a mish-mash of different systems and standards, all in different states of repair (or dis-repair).

The Run seems to reflect the philosophies of the three councils that control it. Our council, Canada Bay, seems to be a fairly pragmatic bunch. They like to build things and maybe, just maybe, put up a small sign afterwards stating what they did.

Ashfield council has elected representatives who think that they should be sitting in state or federal parliament rather than the local council chambers. Instead of worrying around road, rates and rubbish, they are always sticking their noses into things that have nothing to do with local government - electricity privatisation, industrial relations and so on. They are so busy posturing about things that they have utterly no influence over whatsoever that they tend to forget about the basics, like footpaths that won't kill you and drains that are still capable of holding water.

Leichhardt council is run by the Greens, and they are just crazy about symbolism and nimbyism. The mayor has pretensions of knocking off the city Labor member, and might just do it at the next election.

Now that I have described each council, let me describe how their attitudes impact on infrastructure on the ground.

Canada Bay has a nice wide path, properly surfaced and drained and fenced and split into pedestrian and bike lanes for much of its length. Pragmatism has delivered results.

The Ashfield section is a bucket of shit - badly laid asphalt that is constantly being wrecked by tree roots. It's narrow, badly lit and a recipe for pedestrian/dog/pram/cyclist interaction in the worst possible way. Every now and then, the council will dig up a small root-busted section and repair it, and that's it. Instead of fixing their bit of path, council has erected signs telling us that it will all be underwater in 40 years thanks to global warming. That's their way of dealing with the problem.

Leichhardt's section varies from reasonable to plain old dirt. A large section of the path in their sector is simply not there. Roadies like me, who care something for their bikes, are forced to make a major diversion to avoid the missing link. Instead of laying concrete, the council erects signs telling residents that council is going solar. Their idea of environmentalism is to hector and badger everyone to cycle or walk to work, and then refuse to actually build bike paths because that might disturb the habitat of the lesser spotted garden slug.

They are however rebuilding a section of the path in their area. I came across these signs last week - the pink bit on the left, which is the pedestrian path, was plain old mud and gravel not long ago. Now, the mud is gone and we have lovely concrete instead. Note however the sign telling pedestrians to bugger off and use the path by the water - fat lot of good that did. The greener people are, the more they appear to believe that the rules don't apply to them. Their attitude is like, "I recycle my fish heads - why should I have to go out of my way and walk over their instead?" 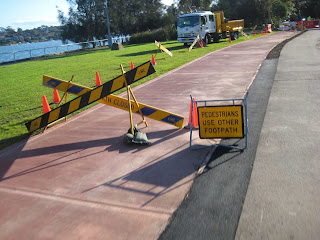 Not much further on, I found that council had thoughtfully parked a concrete truck in the middle of the bike path. If they were going to park it there, why not tell everyone to use the other path, not just pedestrians? This was after a bit of rain, and the grass was soggy as, so as soon as I left the path to avoid the truck, I practically sunk into the grass up to my hubs - skinny tyres and all that. 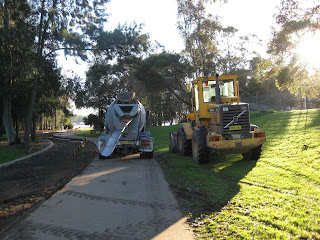 Still, I'm not going to complain too much - they're laying concrete, and that is alright by me. Thing is, the idiotic pedestrians, who now have a nice pink path, will continue to walk on the bike path - just as they do now. What is it with these idiots? It makes sense to put slow moving traffic on one side and fast moving traffic on the other - what sort of fool wants to mix the two together?
Badly proofread by Boy on a bike at Monday, July 27, 2009