Where the walls have shag pile carpet

We ventured into the Southern Highlands for the weekend to attend the wedding of a cousin on J's side. J's family are originally from Croatia, and they all have surnames lacking in vowels like Crvckckwvkc (pronounced 'vishafish') and cool first names like Drago. Half of them are also bonkers. The other half are even more bonkers. The fun part is working out whether the person you are talking to is half mad or three quarters mad.

They are great people - hard working, outgoing, self reliant, family oriented, church going and all that sort of stuff. To them, the idea of accepting a pension after a life of hard work is sponging off the government. They are also pretty insular, and some don't take kindly to an anglo interloper like me - but they sure know how to put on a wedding. If I didn't have the kids to look after, I would have been unconscious under the table before the main course arrived.

We stayed in the world's cheapest hotel, which laughably called itself a "country club". When I hear the words "country club", it brings up visions of manicured golf courses, black servants in tuxedos, G&T's in comfortable chairs in the pavilion and people riding around on horses going "hi-yup!"

I never pictured pink walls, brown carpet from the 1970's on both the floor and the walls, and beds that offered less support than Obama offered the Iranian protesters. I swear I slept on a hammock two nights in a row. 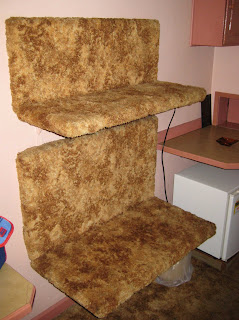 Ooo baby, that wood panelling really does it for me. And the one plastic chair for the room. 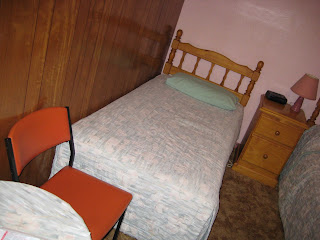 The shower cubicle was minuscule. The Southern Highlands get a lot colder than where we are down on the Sydney plain, so having a shower first thing in the morning could be murder. There was no heater in the bathroom, and the walls were ice cold. Bending down to pick up a shampoo bottle from the floor meant contact first with the back wall, then every other freezing tiled surface as one bounced around, yelping as tender skin stuck to ceramics here, there and everywhere. My sleep was interrupted by the occasional marauding pack of bikers roaring past, or drunken yahoos rampaging through the car park.

The last lot turned out to be our cousins, starting a vodka frenzy.

The food at the wedding turned out to be pretty shocking. It was held in a civic centre, and J described it as "Council food", which was exactly right. I had gristly, lumpy, overcooked lamb on a bed of the most horribly dried and abused roasted potatoes, surrounded by carrots doused with too much sugar. After 8 years of boarding school food, a year of university college food and seven years of Army food, I can eat just about anything, anywhere at any time. This was a meal that I ate less than half of. It was that bad.

Then again, you don't go to weddings for the food. Or the coffee. I was able to stand my spoon in this cup of coffee. Drinking it was like indulging in a thinly watered down mud face pack. 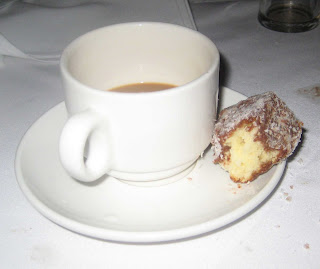 The kids were given a bowl of ice cream, and the kitchen managed to bugger that up as well. It had been frozen, thawed, frozen, thawed, frozen and thawed until the initially cheap-as-dirt icecream was a mass of sand-like crystals. Monkey loves icecream. He will drag chairs into the kitchen and pile them on top of each other to reach the freezer in order to get to the icecream, and I have seen him using every implement in the kitchen to pry the lid off the container. He can eat icecream at every meal. This morning, he wanted boiled eggs with icecream for breakfast.

But he wouldn't eat this stuff. He pushed it this way and that and then shoved it away. Even I couldn't eat it. 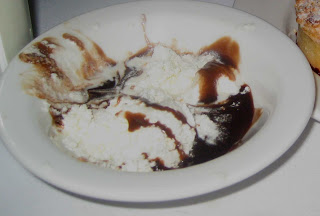 He then did the most insane thing ever. He zoomed off to a table nearby, and started sticking his finger into the dessert of another guest. When I caught up with him, there was a woman sitting there going, "You'll have to stop him doing that, Steve will go nuts if he comes back and finds his food tampered with".

Steve turned out to be this guy, and his brother is only slightly smaller, and was sitting next to him. They're both lovely blokes, great to have a yarn with. Although I am sure he weighs more than 120kg - more like 140kg.

J's sister has two boys in their early teens, and they are in awe of the ultimate wrestlers. They spent half the night trying to work up the courage to go and talk to them. J's sister is about 5 1/2 feet tall, and J, her sister and the two enormous cousins were all very close when they were young. J's sister finally managed to convince the boys to come and meet their heroes, and the eldest asked if he could show them some moves. Instead, he said, "Nah, I'll show your mum some moves so she can keep you two in line." At that, the two of them turned white. The idea of their mum body slamming them out of bed in the morning in order to get them to school was too much to take. I was hoping one of them would pick one of the boys up by the ankle and, dangling him upside down from one enormous paw, question him as to whether he was treating his mother with respect. They're those sort of blokes.

The wedding by the way was fantastic. The groom cried (I am used to them fainting), the bride and groom got up and sang at the reception (and they can both hold a tune), the mother of the groom did a tune as well and even the priest got up and belted out "Crazy little thing called love". The speeches were a treat and actually worth listening to, the kids behaved themselves (to a degree) and the people at our table were nice and talkative.

The older kids confined their foodfight to just their three tables and no drunken fights broke out. I only saw one person chundering, and that was a five year old that had taken onboard too much cake and lemonade. The teenagers didn't get drunk or sneak out the back for a fag or a pash. No one crashed their car on the way home. None of the adults sleazed onto someone else's partner and disappeared for a quick shag. Nothing was smashed, no fires were set, the Police stayed away. No one took all their clothes off on the dance floor, and no one passed out on the toilet or under a table.

Considering at least a few of those things, if not all of them, have occurred at some of the weddings I have attended, in short, it was all quite amazing.
Badly proofread by Boy on a bike at Sunday, July 12, 2009

I stayed in a motel in Gundagai one night on the way from Melbourne to Sydney.

There was lime green shag pile carpets up the walls, and I'm sure there were fleas.

I was so relieved to leave the next morning!

Years ago I stayed in a similar place in Gundagai but it was brown carpets up the wall. And it came with its own supply of BIG Huntsman spiders. They blended in well with the carpet.

"beds that offered less support"
Were you infantry?
If not - OK
If so - you're getting old.

I experienced two types of bed in the infantry.

In barracks, it was a thin, plastic covered mattress that the sheets invariably slid off during the night, depositing one on the cold lino floor. I believe they use the same mattress in prisons, albeit a thicker and more comfortable version.

The other was mother earth, complete with sticks, rocks and other things that always found a way to poke into your hip. I think we all gave the air mattress thing one go and gave up, never to carry it around again.

I am getting old. I like my toes, hips and head to all be in the same plane when I sleep.

Irobot
Oh, maybe they were brown!
The room was as a little bit wider than the single bed.

Didn't see any spiders... too tired. I think it was about, um....
might have been 1981, gave a friend a lift to Melbourne and visited a boyfriend at Pucka, or it might have been 1991, travelling to or from Melb/Syd before I got married.

I had that awful itchy creepy-crawly feeling... but I was so tired fortunately I just flaked.