Which idiot phased these lights?

Ever since man invented the traffic light, those of us who use the roads have been complaining about how they are phased. I am sure things were the same back in the time of Pharaoh, with chariot drivers complaining about the way idiot magistrates controlled traffic flow.

The Sydney CBD is currently undergoing a massive expansion as far as bike lanes are concerned. By that, I mean that 75 metres worth were built in the last six months, which takes the total of bike lanes in the CBD from 0.00km to 0.075km, give or take a metre or two. That's huge!

Here we have the King St bike lane, which opened with much fanfare (I am sure a month or so back). This street has always been one of the major bike entry points into the city for those of us that live westward-ho. I've always avoided it like the plague, as you have fast moving traffic coming off a slipway to your right, before powering up a short and nasty and narrow incline. It's a bad place to mix slow moving cyclists, huffing and puffing up the hill, with cars tearing up behind. I always found it safer to go south and come into the city from around Central Station. That might sound odd, but I always felt happier going the long way.

I don't mind heavy, fast moving traffic so long as I am moving fast as well - if I can keep up with the flow, or be going not much slower than the average car, then I am safe. I have always tried to keep my fitness and power up to a level where I can hammer it when need be, sometimes going faster than the cars can bear. Drivers give you a lot of slack if you aren't seen to be holding them up.

Going way, way slower than cars is a recipe for disaster - some aggro meat brain is bound to try and overtake you in those circumstances, leading to rider being clipped and knocked over.

Anyway, here we are, waiting for the lights at King St to go green. I've just come off the shared bike/pedestrian walkway which runs into the Pyrmont Bridge - a crowded, chaotic disaster area at peak hour. Makes Delhi look sane and organised. We cyclists come off the bridge, after ducking and weaving around pedestrians that amble addle-brained on the left, right and centre of the path with no thought for others, and then we queue up at this point waiting for the green. 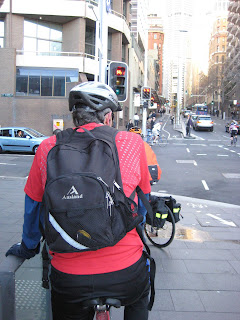 Us sensible older guys stay clipped in and lean on this handy railing just before the corner. There's usually up to 10 of us stacked up around this area, waiting to go. 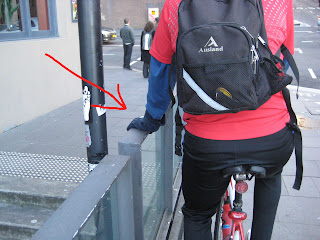 Here's the bike path up the hill - doesn't look like much from this angle, but the camera always flattens things. I never find it a problem - if I am at the front of the pack, or rolling off the walkway when the lights go green, I try to be in 2nd when I hit the bottom of the hill, and then I just stand up and power up the hill as fast as I can go. On a road bike, that represents a reasonable clip. The trick is to try and avoid being stuck behind a mountain bike where the rider decides to go up the hill in 1st - their gearing is about 3 times lower than mine, and they crawl up the hill slower than Michael Moore after a big lunch. 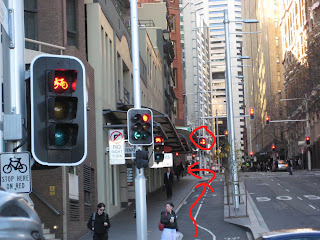 Regardless of where I am in the pack, I have never, ever made it to the next set of lights before the bike light has gone red. You've got 5 seconds from when the light at the bottom goes green to when the one at the top goes red. Not even Alberto Contador could do that from a standing start.

As a consequence, cyclists just blast through the red at the top of the hill. The problem with that is you have cars turning left, and bikes going straight through - recipe for disaster before long. I turn left at the top, and I can sneak into the left hand lane on the street running perpendicular even if cars are turning left as well, as they all end up in the middle lane of the street they are turning into.

But I have to ask, what idiot engineer at the RTA came up with this phasing system? I don't mind sitting at the bottom of this hill, as I can stay clipped in on the flat and have something to hang onto to stay upright. I don't need to keep one or both hands on the brakes to stop from sliding backwards, and take-offs are easy. No cyclist in their right mind stops at the next set of lights, as you end up having to make a really hard start on a narrow, nasty bit of hill - you simply have to keep going, or you are stuffed.

When you look at projects like this, you just know that 50% of the budget was spent on consultants, focus groups, advertising, consultations and architects, and about 3% on actual laying of tarmac. Why couldn't they have spent a bit of cash on an engineer that knows how to create a sensible light phasing system?
Badly proofread by Boy on a bike at Monday, July 27, 2009