Due to a lung full of snot, I caught the bus into town this morning. As the bus went down George St near the QVB building, I spotted a small protest out of the corner of my eye. I hopped off at the next stop, and walked back to take this entirely crappy photo with my rubbish camera phone. At least it provides a bit of context for the size of the protest, which was against Gunns and their pulp mill in Tasmania.

Here is my count of the protesters - 11. There may be some short arsed wingnuts hiding behind the idiot in the superhero costume, but at most, there could be no more than 15 people at this protest. No one was giving them the time of day.

Here is a photo from the Tasmanian Times, showing the same protest. 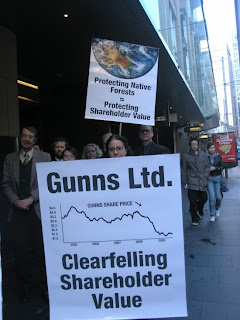 Notice how it has been cropped to make the frame look nice and full. In reality, there was a tiny knot of people on a largely empty street.

The Tasmanian Times bills itself as providing:

A forum of discussion and dissent — a cheeky, irreverent challenge to the mass media's obsession with popularity, superficiality and celebrity. Balance is appeasement.
Fairness is truth.

Hmm. How superficial is it to manipulate a photo to improve your position?

Interestingly, with Al Gore in town today, the Fin Review ran two stories on his presence (I have no links to them). Neither mentioned that 30-odd protesters staged a demo outside the venue where he spoke.

Funny how protests always get coverage if they come from the correct side of the political spectrum, but go unnoticed if they fail to march in lock-step with the media mindset of the moment.
Badly proofread by Boy on a bike at Tuesday, July 14, 2009