I left a little later than usual this morning - closer to 8am than my usual 7am-ish kick off, and found an entirely different demographic out on the roads. At 7am, I see women walking around the Bay, but usually 0.00% on bikes heading into town. At 7.30am, I might see maybe 1 woman for every 19 guys on bikes. However, closer to 8am, it was chick city. 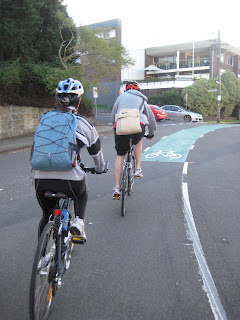 It wasn't until I caught up with these two that I realised that they were school girls. 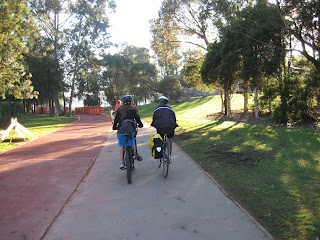 Female commuter on the ANZAC bridge. 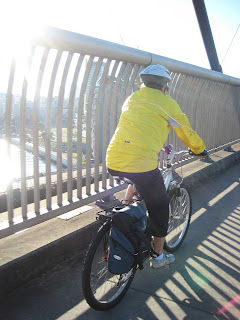 One of the few blokes that I saw - and I know how he feels. I pulled over to check that he had everything he needed to fix his flat, but he was well prepared and didn't need any help.

A horde of chicks on the Pyrmont Bridge. Yesterday, I posted a photo of a bike snake that forms when men ride across this bridge. One bloke takes the lead, and everyone else tucks in behind. That way, us cyclists have the smallest possible "footprint" (or wheelprint) as we cut through the pedestrian traffic. It's also much easier for oncoming pedestrians to deal with a predictable line of bikes, rather than a gaggle going in all directions.

Look at this photo - instead of a line, we have a "six finger" formation, and there were more behind me meandering to and fro. 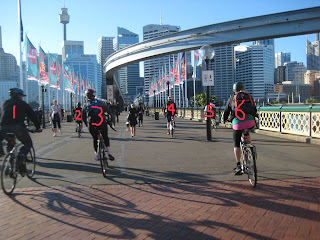 What is it with women? Men who have never met before will unconsciously create spontaneous order out of chaos. A line forms without prompting. No words are spoken, no eye contact is made. We simply form a conga line and go. Women on the other hand..... chaos out of order. And none of them seem to think that this is a problem! Sure, there's always a few idiot males who bolt across the bridge on their own at full speed, tearing through the crowds of pedestrians like an insane barracuda, but most blokes just form up and head for the horizon.

The next photo shows the madness at the end of the Pyrmont Bridge. We have to negotiate this narrow walkway, which is usually densely packed with people going both ways. I have never been able to take a photo before, as it is always too risky to takes one's hands off the handlebars for an instant, let alone losing concentration whilst taking a photo. The traffic thinned out for a few seconds and I grabbed a quick snap. 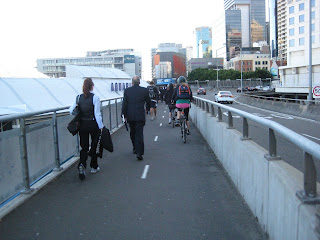 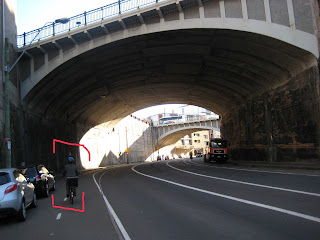 And here we have the Harbour Bridge again. See the small road bridge that I am going under? That's used for parking for the Sydney Theatre Company, owned by Cate Blanchett, who is something of an environmentalist. I looped around and went past that car park in the sky, and noted that most of the car spots were reserved for the STC wardrobe department. Fascinating that such a committed environmentalist as Cate would allow her minions to drive to work. The STC is quite close to the central ferry terminal, a train station is not far on foot and plenty of buses visit this area. Plus, it is a magic spot for cycling. Why the cars then? Surely this mob should all be riding unicycles to work. 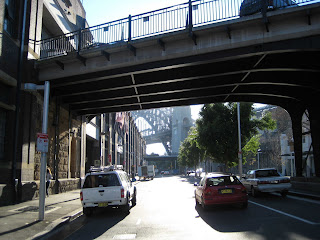 Another view of the Bridge - it's surprisingly massive from down here. 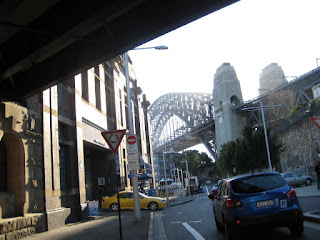 And then I was at the office, and that was that for the morning.

The afternoon ride home was pretty hairy. I was almost doored - except that I heard the "click" of a door being opened from the inside just as I passed the rear bumped of the car in question, and I managed to swerve violently as the driver's door flew open. Then a woman coming towards me turned right across my path - only seeing me at the last moment and braking. To cap it off, a Chinese couple stepped right into my path as I was going around the Casino. I saw the two of them standing on the footpath, then I glanced at the speedo (39km/h), then looked up to see them getting ready to step onto the road.

I figured they would wait for me to pass before walking onto the road, so I glanced over my shoulder to check that I could move into the right lane. When I looked back, they had walked boldly into my path! I don't mean they had stepped onto the road, but lagged back from my intended path to let me pass before resuming their stride - they had stepped directly into my direction of travel!

Let me try and illustrate this. The bike has what I will call a "cone of maneuverability". The closer you are to something, the narrower the cone. The further away something is, the greater your ability to swerve around it. When I first saw this couple, they were at a spot in the cone where I had plenty of options to go around them. I could have jumped into the right hand lane and gone very, very wide, giving them plenty of road space - but I had no expectation that I would need to, as sane people just don't step out in front of you. I pass hundreds and hundreds and hundreds of pedestrians each week, and all exhibit reasonably sane and predictable behaviour. 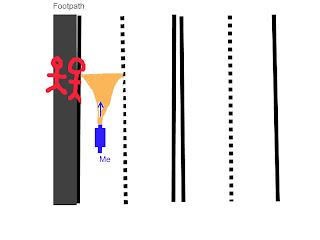 These idiots though displayed nothing of the expected road sense and good manners that we normally see on the roads (yes, there are always idiots, but even idiots are predictable). The most dangerous thing about these two was their unpredictability. After glancing over my shoulder, I found that they had walked right into my cone. 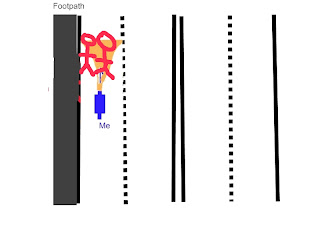 I jammed on the brakes, being thankful it was dry and there was no traffic around. I just managed to squeeze around the woman by going left - the other thing is that they spread themselves out just sufficiently to almost take up an entire car lane from side to side. I know it sounds hard for two people to do that, but it can be done.

I think their problem is cultural - they simply think cyclists are 2nd or 3rd class, and should stop for them, even if they don't have the right of way. They probably aren't used to bikes travelling at nearly 40km/h either. But I put it down to just plain arrogance on their behalf. They thought they could deliberately get in my way and I would just have to deal with it. Pedestrians try this trick with buses from time to time, generally with messy and tragic results. With my speed and mass, the outcome would not have been pretty - not as bad as being hit by a bus perhaps, but still unpleasant and bloody.
Badly proofread by Boy on a bike at Thursday, July 30, 2009

Jayzus, BOAB, you are one game critter.

In the none too distant future, it is going to be illegal to publish what you just posted.