The most perilous factor in my cycle into work is dealing with pedestrians. I am a law abiding kind of guy - the lights turn red, I stop. They turn green, I go. I don't ram through stop signs and blast through red lights like some cyclists - I behave on the road like I have a numberplate fore and aft, and there are cops just waiting to take down my number and give me a ticket. I don't believe that being on a bike gives one the right to suddenly ignore all those pesky road rules that motorists have to put up with. I generally ride my bike like I drive my car.

Trouble is, the bike is nowhere as intimidating as the 4WD. There are a few stretches of road in the CBD where I can really open it up and get a good amount of speed going on the flats and downhills, although I usually apply the brakes when the speedo hits 60 (as it does on one major hill) - there are lights at the bottom of that particular hill, and I don't want to ever find myself having to suddenly brake or swerve at speeds over that. The thing is, I'll be howling along at up to 40km/h, and pedestrians will just step off the sidewalk right in front of me and stroll across the road with the expectation that I will stop or go around them - if I can. The worst place for this is right outside a set of law chambers - the bloody barristers cross against the lights all the time, and when I worked down that way, I came close almost every night to cleaning up some bewigged fool.

My biggest bugbear now is the idiots that work in the Symantec building behind Wynyard station. The lemmings come streaming out of the back entrance of the train station and walk straight across the road without regard to the traffic coming in either direction - they must have fallen asleep on the train, and are wandering around in a zombie-like trance prior to an ingestion of coffee.

I encountered the worst possible specimen last week. She was in her 50's, and stout. She reminded me of Mrs Bucket. 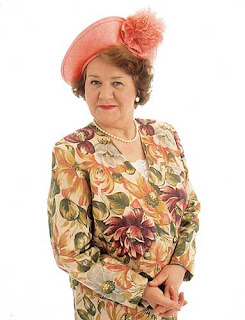 Her most striking aspect though, as she waddled across the road in front of me, was her determination to not look in my direction. Just by looking at her body language, I could tell that she knew that I was approaching at a rapid rate of knots; however, that did not stop her from jaywalking across my path. Her approach was clearly that, so long as she didn't so much as glace at me, then I did not exist. If she refused to acknowledge that I was there, then she could break the rules of the road and force me to give way. She was like a young kid that covers his eyes and thereby negates your presence. A less mature version of, "I can't hear you".

I want my old pump back. It was a long one, and at full extension, was about 4 feet long. It would be perfect for clouting old trouts like this one across the arse as you zoom past.
Badly proofread by Boy on a bike at Monday, July 27, 2009

I'm planning to get a bike fairly soon to help with my fitness endeavours. I wish more cyclists did think that the laws of the road also applied to them (red lights etc)! When I was at school we had to learn how to ride properly and take our "Cycline Proficiency" test. But so many people just get a bike and drive as if the road belongs to them and the laws of the Highway Code don't apply to 2 wheels!

Interesting to note that Hyacinth Bucket is familar to you in Oz -- I was not aware that a mediocre British sitcom like that would be known outside of the UK!