Hamas use Qassam rockets. They are crude, and can certainly kill, but you'd have to be nlucky, as they're unguided and their flight path is quite random. See http://en.wikipedia.org/wiki/Qassam_rocket The 2.75 inch rockets in your pics were used in Vietnam on "Bushrangers" (a cobbled-up UH-1H chopper with roughly the same weaponry as the Cobras). See ttp://www.hotkey.net.au/~marshalle/raaf/bushranger.htm I had only one experience of seeing them used when we encountered a bunker system, and they were very effective. I wouldn't like to be on the receiving end of either a Qassam or a 2.75, but would suggest that the 2.75 would be much more lethal.

I went to bed before finishing my story, so I will continue. 1735099 is quite right, that you'd have to be dead unlucky to get killed by a qassam. My reading last night also informed me that to called the rockets used by Hezbollah a "katyusha" is quite incorrect - a katyusha is a specific type of rocket used by the Russki's, but it is now used generically for many rockets fired into northern Israel.

The main different though between a qassam and a 2.75 inch rocket is that the former is propped up on a stick and fired any old how at maximum range (and beyond visual range) at an area target, whilst a 2.75 is fired from much shorter range and deliberately aimed at a point target. The difference in lethality probably has more to do with the fact that a 2.75 is aimed at something or somebody that the firer can see, whilst a qassam is lobbed randomly at something you can't see, and there is no correction on the next rocket to account for fall of shot (because Hamas don't have any spotting capability).

If I detached a pod of 2.75 rockets from a gunship, took them into an olive grove, propped them up with a bit of fence post and then fired the whole pod into Israel, chances are they would be no more lethal than the Qassams. They might scare the crap out of a few people, but being unguided and untargeted, you'd only hit someone by chance.

If I stand 5 metres from you and hurl a cricket ball at you, I am much more likely to hit you than if I went down the end of the street and hit cricket balls at random over houses and into backyards. A precisely targeted weapon is always going to kill more people than an untargeted one. If I loaded a qassam on a trailer, drove it to the your street and fired it at your house from a range of 200-300 metres, I would probably take you out.

Here is a photo from Google Maps of Sderot in Israel. It's just over the border from Gaza, and it's taken a lot of rockets and mortars. This screenshot is of the western edge of the city, the part closest to Gaza. 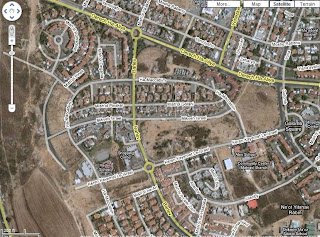 The first thing I noticed was that you can't zoom in much on these photos, either because Google can't get detailed photos, or they have deliberately degraded them to deny Hamas good targeting info.

The second thing was the amount of open space between the developments. This is not a densely packed suburb like Newtown or Balmain. Looking at this photo, maybe 40% of the land is open and unoccupied. Therefore, an unguided rocket has a 40% chance in the first place of hitting nothing (unless you are taking a stroll in an empty field). The houses and apartment blocks stand well apart from each other, so there is more open space between each building as well. Then you have wide roads that take up even more open space.

Plus all the land to the left of this photo is open space, so drop-shorts are only going to take out the odd sheep.

Here is something interesting:

The Qassam 1 has a diameter of 60 mm, carries a warhead weighing 1 lb (0.5 kg), and has a maximum range of only 2 miles (3 km). Early attacks using these rockets failed because they landed inside the Gaza Strip itself rather than upon their intended targets The danger posed by Qassam attacks began to grow as improved versions were developed. The 150-mm Qassam 2 carries a warhead between 11 and 15 pounds (5 to 7 kg) over a distance of about 5 miles (8 km). The most advanced version seen so far is the Qassam 3 with a 170-mm body containing a 22-lb (10-kg) warhead and traveling as much as 6 miles (10 km). The Qassam attacks have generally done very little damage and killed or injured just a handful of people since most of the rockets fall harmlessly in open areas.

They then developed the Qassam 2, with a warhead of between 11 and 15 pounds.

Hmmmm, anyone see a pattern here? The Palestinians are not stupid and inept - they are constantly developing bigger and better rockets that can fly further and pack a bigger punch. Given time, I'm sure they'll develop a better guidance system, allowing them to land them on populated areas, rather than having them explode harmlessly out in the open. If I was them, that's what I would be doing. You don't go to the trouble of building and firing these things just to make a pretty bang you know - you do it to kill people.

Eventually, they'll improve to the point where they are deploying something equivalent to a German nebelwerfer or a proper Russian Katyusha - weapons which were rightly feared and hated by the people who were on the recieving end.

To go back to Ant:

Yes, one of the strongest military powers in the world wants everybody to believe it’s scared of a few home-made rockets.

I don't think the Israeli's are scared that much of the current generation of home-made rockets. But given the Gazan's propensity to continually develop bigger and better weapons, I'd say they are very worried about the Qassam IV, the Qassam V and the Qassam VI. Do you wait for the Qassam IV with a 50 pound warhead to start dropping accurately on your population centres from 15km away, or do you say "enough is enough" and take action now?

Just remember, these guys in Hamas are right bastards. If they develop an accurate guidance system, they won't use it to target Army bases - they'll use it to drop their rockets on schools and hospitals and kindergartens and cafes. Their aim is to deliberately kill women and kids in the hope that will drive the Juice into the see.
Badly proofread by Boy on a bike at Thursday, January 01, 2009

Rafael is developing this system for the IDF. It is specifically designed to defend against attacks by rockets such as Qassams:
http://www.rafael.co.il/marketing/SIP_STORAGE/FILES/6/946.pdf
Unfortunately for the citizens of Israel living close to Gaza, it won't be ready until 2010.

BTW 1.30am in funny country is 12.30am in Godzone. I was seeing the new year in (and making sure my 17yo daughter got home in one piece).

(Mainly cross posted from a comment I left over at [url=http://blogs.news.com.au/dailytelegraph/timblair/index.php/dailytelegraph/comments/not_so_squeezy/]Tim Blair's blog[/url])

Israeli civilians by law must have designed their homes with saferooms and bunkers when possible and the country has implemented civil defense warning system networks (high tech air-raid sirens) to give people a maximum amount of time (around 15 seconds) to seek shelter.

As a result of this, as well as emergency medical response to terror attacks, Israel's casualty rates are far lower than they could be. So instead, we get to listen to chattering fools like Loewenstein, deride the Hamas attacks as a mere annoyance.

If they were fired on Kings Cross in Sydney, the body count would be far higher. Israel has been forced to learn to deal with this problem, and now they suffer bad-PR as a result...

It’s certainly not like Hamas to give Israel any warning.

Residencies in Gaza are designed to provide safe rooms, however those aren’t for people. They are for weapons and munitions, but those have secondary explosions which kill the civilians as well. Responsibility: Hamas. Blame? Israel, of course.

Palestinian deaths as a result of inadequate medical care can often be attributed to Hamas seizing resources such as medical equipment and fuel from shipments and stockpiling it for their own needs, denying access to non-Hamas medical institutions.

The bottom line - if you choose who’s right and who’s wrong by bodycount, you are being badly misled by cynical murdering Islamist terrorists.

The ultimate evidence - When Israel accidentally kills a Palestinian child, nobody in Israel celebrates. When the Palestinians very deliberately kill a Jewish child, there is dancing in the streets. That is the difference between a society who love life, and one which worships death.