Who takes a telescopic sight to a riot?

Interesting non-article in the SMH today about a riot out in western Sydney that supposedly involved two families. I call it a non-article, because it really tells us nothing about what happened. We do know that a few people were wounded, and that it was hot, but not a lot more.

One man was shot in the back, another in the buttocks, four were stabbed and one had head wounds, police said. 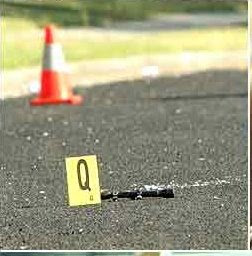 The caption from the above photo, lifted from the SMH web site reads:

(Clockwise) Police at the area where the riot took place, neighbour Gail Coffey, a victim is brought to the hospital, and an item on the road is marked by police

An "item" on the road? Can't you tell that it's a fucking telescopic sight?

I have so little faith in the reporting by the likes of the ABC and Fairfax from places like the Middle East because they don't know what they are looking at. I doubt that between them, they have any journalists with any sort of military background, including serving in the Boy Scouts. How can you report on a war if you don't know which end of the boomstick the shooty things come out of (to bastardise the Dissident Frogman).

Apart from Hamas threatening to kill journos who report things that they don't want us to know about, I believe that it's a piece of cake to pull the wool over their eyes, and that it happens on a regular basis. Just because they have "served" in the Middle East for a few years, it doesn't make them an instant expert in events when things go boom. "Serving in the Middle East" can after all mean little more than running up a big bar tab at a good hotel in Jerusalem, only venturing out every few days to don a flak jacket for 10 minutes in order to file a story against the usual gaggle of urchins and neer-do-wells. They are legends in their own lunchtime.

I doubt that I could do much better, but I can't stand this idea that somehow we have 'seasoned' journalists reporting back hard facts from faraway places. If they struggle so hard to get the facts right at home, why would we think that they can do any better in countries where they don't speak the lingo, aren't immersed in the culture and have no background in the military?
Badly proofread by Boy on a bike at Tuesday, January 06, 2009