What! Me writing about eco friendly housing? Is there something in the drinking water?

Back in 2004, some friends wanted to build a strawbale house on their property. The idea was to build a one room "gazebo" (as they called it) to see how it went.

I got a call in January, just before Australia Day, from Lippy to say that she had booked her family and me (the slave labour) into a strawbale house building course in Ganmain.

Ganmain. Drive 5 hours to Wagga and turn right and head for Perth.

How could I refuse? Did I have anything better to do on a long weekend than drive to the end of the earth, hang out with hippies, bake in the summer sun, get a new set of blisters on my hands and dirt under my fingernails? Of course not.

As it turned out, Lippy couldn't go on the course. She was doing hush-hush national security stuff at the time, and she had to go and hang out with Donald Rumsfeld for the long weekend (presumably learning how to waterboard hippies - something I would have loved to try out by the time the weekend was over). So I did the course with her partner (bundyman), her daughter (bumcrack) and her daughter's partner (Opportunity squanderer).

As this was before I blogged, I wrote a long email at the time to my friends, cursing the hippies and the heat, and if I ever find it, I will put it up.

This is what the finished product is supposed to look like, although you can put a more professional looking roof on by using new tin instead of used tin. The walls are essentially mud, packed on several inches thick by hand. This is what we used to do as humans, until we discovered how to make bricks in enormous brick factories. 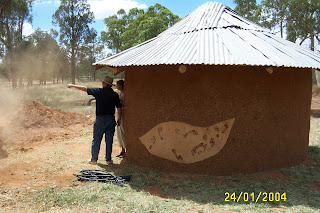 Frankly, I really enjoyed it. I love building stuff, even if it means occasionally falling off a roof and ending up with a leg full of stitches. Even a completely incompetent builder like me can fashion a workable building out of straw, mud and a bit of cement.

Here's the "gazebo" in progress. By this time, it was May, and winter was closing in. I froze my arse off building this thing - the wind came howling in across the plain that this property sat on, and I made sure I counted all my fingers when I sat down to dinner - just in case any had frozen off during construction. Which partly explains why we were building with strawbales - they are just the best when it comes to insulation - at least 4 times better than double brick. Having baked through many an Australian summer, when we get around to building a place, part of it will be straw bales (if our "green" council will allow us to use such a radical and eco friendly product). 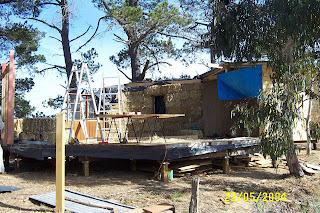 The floor boards were a classic. They are made of thinly sliced ex-railway sleepers. Each sleeper was put through the mill to remove the rough outer bits, then sliced about 3/4 inch thick to produce the most incredible floorboards I have ever worked with. The sleepers were all different - blackbutt, yellowbox and other hardwoods, so the boards came out as red, yellow and almost black. Nailing the damned things down just about killed us - they call it "hardwood" for a reason. 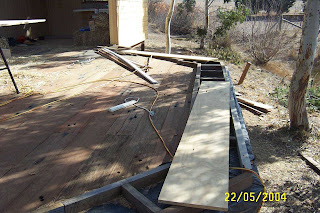 A lot of stuff in the place was recycled. All the joists and bearers for the floor came from a demolished house. The floorboards were all discarded sleepers. I think the tin for the roof came from an old shed up the road that was being demolished (I was around for the shed demolition, but not the raising of the roof, so I don't know what ended up on top).

Although we did the course almost 5 years ago, I still remember the hippy that ran it raving on about cement and concrete, and how much energy it used to create the stuff. Now I love cement - it is the bedrock of civilisation - but people do have a tendency to go overboard when using the stuff. Especially the wogs. I'd love to run around at night smashing the cement lions that dot the front yards of this suburb.

Having help build a place out of bales and mud, and seen how incredibly good the result is (and how cheap and easy it is to build), I despair when I see rabbit hutches like this being thrown up all over town. We have problems with housing affordability - this stuff is cheap. You can DIY most of it. Running air conditioning all summer costs a packet - you hardly need to turn it on if you've got walls half a metre thick. The combination of straw and mud is amazingly fireproof - better than brick in fact - making it great for bushfire prone areas. It's easy to repair - even Monkey can mix mud and throw it at a wall. Building it is fun, and it's something all the family can get into.

However, with all its advantages, most Councils look upon it with horror - even those that profess to be deeply Green. Having had a go with this stuff, I reckon most of the guff that our councils and government departments feed us about "going green" is just that - guff. Aflatus. Hot air. Twadle. I'll believe they've gone green when suggestion the building of a strawbale house raises a smile on their faces, rather than a grimace.
Badly proofread by Boy on a bike at Saturday, January 24, 2009

Probably like the councils, I do wonder about it. How will it last? Potential mold issues? Would it encourage hypothetical kids to make mud pies in the house? How much maintenance? What kind of failure for too little maintenance? If you don't put pipes & electrical in the straw wall but on the straw wall and then cover it with drywall then if the roof leaks into the strawwall will you know about the leak before the wall begins to collapse? How much will the straw decay over time (because it is sealed supposedly, none, but I still wonder) Where I live it gets too hot in the summer and too cold in the winter (which I'd imagine would stress a mud wall) how much time would I have to spend doing maintenance?

I know a couple who have a mostly offgrid straw house place in Montana (he definitely isn't a hippy, he's a bit of a nut and his girlfriend goes along with it). I'm pretty sure he used a lot of concrete instead of mud. The wiring was in conduits mounted on the walls. He seemed happy with it.

BOAB, I suspect that the reason "green" councils dislike this technique is because they don't meet building codes. I don't know what y'all use in Australia, but building codes in Seppo Land exist for three reasons: health, safety, and supporting the construction industry. DIY projects like this don't support the third very well.

There's a reason for such codes, but when you have bureaucrats, politicians, and activists enforcing a technical code, common sense is often tossed to one side.

Mud & straw is an effective technique; any wall that thick turns a structure into an efficient heat/cold sink. Some houses in the US were built using old tires and dirt for walls. Labor intensive, but the material is (ahem) dirt cheap, and they are very efficient, energy wise.

How does it do in the rain? Not being snarky, just really curious.

I imagine it'll do OK if you whitewash it, or maybe put a layer of stucco and paint. If you don't, mix up more mud, and slap it on. Lord knows there no dearth of dirt.