There is the world that Harold Scruby inhabits, and then there is the real world. When I write about things, I divide my statements into two groups - those which are based on direct observation, and those that are based on conjecture.

I will now speculate. I will add conjecture. I think these pedestrians are doing it because they are fat-headed, care-nothing-for-thou pricks. I bet these are the same people that behave stupidly in supermarket queues. I bet these are the sort of people that cut you off when they are driving a car. I bet they are the type that talk loudly in cinemas, and spend the entire movie talking on their mobile. If they own a dog, they are the type that lets it crap on your lawn, and then doesn't pick up after the dog.

The Americans have a nice term for these people - "ass clowns". I'm not sure exactly what an "ass clown" is, but I am sure I am looking at two prime examples right here. 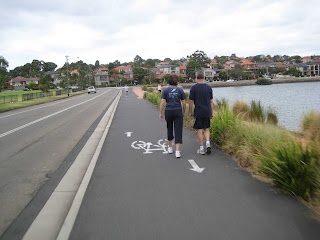 Here is a better photo of where your tax money has gone. Council has put a lot of effort into building one path for pedestrians and one for bikes, colouring them differently, separating them with a garden and erecting signage every hundred metres or so. The only people who have an excuse for walking in the bike lane are the blind, because the bastards in the council have completely ignored the disabled (not that I see much point in a blind person walking around an area that has a smashing view - kind of defeats half the purpose of doing The Bay). 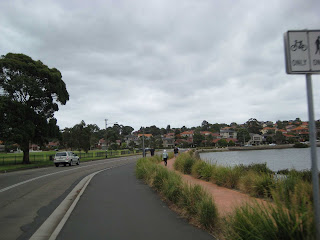 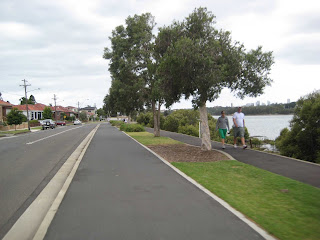 Last year, another cyclist wrote to our local paper and described this section of path as the "inner west intelligence test", implying that a reasonable number of pedestrians are too thick to pass a fairly basic test. I tend to agree. I'd be happy if Harold suggested implementing a test for pedestrians. Those that failed would be shackled with a ball and chain, thus limiting their ability to go very far at all, where all they do is annoy the hell out of the rest of us.

I just thought of another directly observed example of stupidity. When I was shopping tonight, my access to part of the milk fridge was blocked by a woman who had propped the fridge door open and was reading the label on a carton of milk. She didn't open the door, take out a carton, close the door, step back and then read it - she kept the door open, letting cold air out and blocking everyone else who wanted that variety of milk.

Luckily for me, the stuff I wanted was in the next fridge. When I got to the end of the cold aisle, having stocked up on OJ and apple juice and other dairy products, I turned and found that she was still standing there with the fridge door open - except a queue of very polite shoppers had formed behind her. She was utterly oblivious to her impact on her fellow shoppers.

I bet she is the sort of person that does that, then complains to the store manager that the milk is warm!

Can't we banish these people to an island or something?
Badly proofread by Boy on a bike at Tuesday, January 20, 2009