Pooping in the nest

One of the things that constantly brings joy and mirth into my otherwise dull and suburban life is the behaviour of the ferals in the housing commission developments roundabout. Oh, how I wish we were back in the east, sipping lattes, swigging unoaked Chardonnay (oaked is for the uncultured, uncivilised suburbanites) and generally bantering about the latest play we had seen at The Wharf.

[I'm not kidding about most of that. We used to have season tickets to the Sydney Theatre Company, I had a room full of very expensive Chardonnay (oaked and unoaked) and my favourite coffee is still a latte - and I did live in the eastern suburbs for over a decade].

But one thing we lacked in the east was an underclass. Sure, we had a number of homeless loons that hung around the cross, and I guess you could count the drunken pommie backpackers at the Bondi Hotel as an underclass (shaven heads, soccer shirts, sunburn, tattoos and muffin tops are not a good look) - but the only place where we had a proper, multi-generational gathering of dole-bludging bumwipes was at Woolloomoolloo - and we avoided that area most of the time. One could spend their entire existance in the east without once bumping into a member of the tit-sucking victimhood.

Alas, that is not the case here. The government, in its infinite wisdom, decided that the unmotivated, spiteful little tramps should be exposed to the productive members of society, which meant dropping housing commission developments slap bang in the middle of places where "working families" want to go. Wasn't that a great idea - putting thieving families with horribly expensive drug habits right in the middle of working families, who have houses chock-full of all the goodies that study, hard work and effort tend to bring. I was going to say "thrift" as well, but given that most of the people around here have hocked themselves to the eyeballs in order to get an Audi A6 and a plasma TV the size of a ping-pong table, I'll leave thrift out of it.

Here we have one of our two "open prisons" as I like to call them. Notice that some little bumwipe has decided to poop in the nest by spraying graffiti over their own home. 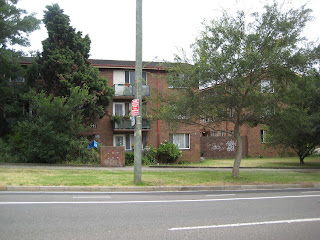 Most of the time, I'd say "you can sit in your own filth", but it then struck me that there might be old age pensioners stuck in a place like this, jammed up cheek by jowl with a wife beating Ice addict who has just avoided jail by claiming to be a victim of society, for the 78th time.

If we're going to blow a stack of taxpayer cash on a stimulus, at least use part of it to build a pile of prisons. It's good for the construction industry (which is in the dumps), it will provide ongoing employment (for warders) and it will keep the toerags separated from the rest of us. Even better, build the prisons on Christmas Island, and let them swim home when they've done their time.
Badly proofread by Boy on a bike at Monday, January 26, 2009