Disclosure - I can't tip stocks to save my life. Do not accept stock recommendations from me. I don't own any Stockland shares, and after seeing one of their developments today, I doubt I ever will.

There are lots of photos in this post. Bear with my whilst they load. There is one feature of blogger that I utterly detest when I am doing this sort of thing - you can only load 5 photos at a time, and it now reverses the order of them when they appear in your blog. Therefore, all the photos in this blog are arse about. This should be the last photo, but I can't be bothered cutting and pasting 16 photos to get them in the correct order.

I've learned to deal with it - you will have to as well.

Ermington is a suburb out near Homebush Bay - it's on the opposite side of the Parramatta River to Homebush. Ermington appears to be an older suburb, with lots of small postwar workers cottages made of fibro and such. Given that it used to be a working class suburb, it has a fair number of industrial sites scattered through it. Stockland, a property development company, has been flattening one such site and redeveloping it with the modern version of rabbit hutches.

Here is the good part about Ermington - a great big park with a good bike track that follows the water. I've never done it before (and the only reason I did it today was that I got lost). It's a great ride. Lots and lots of cyclists were using it, with good reason. 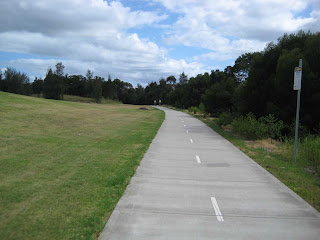 I used to see ads on TV for various Stockland sites around Sydney. They all featured lots of walking tracks and bushland and open space, with people twittering on about what a lovely place it was to live. What I found today is that those ads are 50% fact, 50% fiction. A walk through some lovely bush does exist, but it stretches for about 50 yards only - not the kilometres of bush walking that I was expecting. There is supposed to be a path right along the river, but part of it is blocked off (as shown below). The sign says it is should have opened in late 2008 - which is now in the past. Presumably the path will open when that wasteland in the background has been covered in more housing and sold. Given they haven't even put down concrete for foundations yet, I imagine this path will open in 2018 if we are lucky. 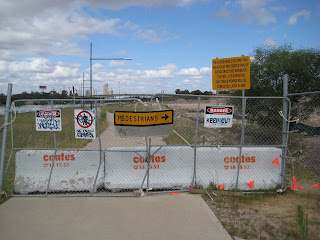 As this is a brand new development (I saw a sign on one door from the cleaners saying "Final clean done on 17 Dec 2008 - please take your shoes off when entering" - that's how new it is), you'd expect them to take care of little things like wheelchair ramps in the kerbs. This photo shows a bridge over a stream (really a rubbish tip with water running through it), and no ramp in the kerb. How am I supposed to get a bike up there to the bike path, let alone a wheelchair or a pram? Not much good for attracting families with babies is it? 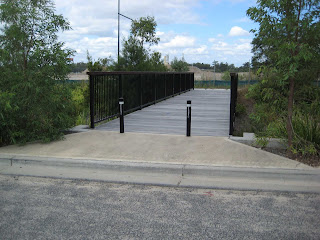 I rode through what I imagine is stage 1 of the Ermington development. There were 3 or 4 streets running in parallel, and the last street was utterly unsold. The best they could do were "deposit taken" stickers on a few signs. Things must be getting desperate when you start proclaiming that some numpy has put down a deposit. 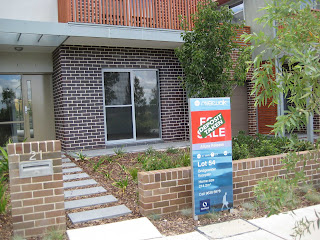 I rode up this "hill" to get a view of the development so far, extending over the next phase (bare, barren ground) towards a chemical plant of some sort in the distance. Lovely. 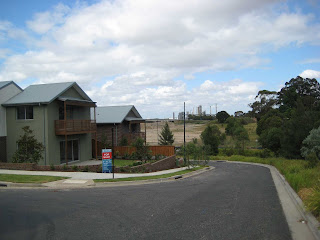 No development is complete without wanky art and sculpture. Here are some examples. They are 30 feet off the ground, and I bet the residents living across the road from them have never noticed they exist. People never look up. 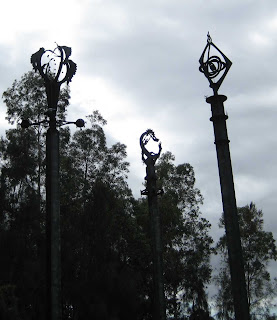 These hutches, I mean houses, are advertised as having 3 bedrooms. If that ugly, grey shoebox at the top is a "bedroom", the developers should be taken to court for cruelty to humans. I could understand it if these places were sold as having a sauna in the attic, but a bedroom, with no eaves? The architects must be sadists. Crossflow ventilation seems to be non-existent. If they want to call this "eco friendly", all I can say is "epic fail". 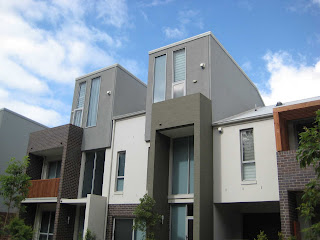 We live in an age of rubbish bins. We have the same system in our suburb - green is for garden waste, yellow for recyclable waste and red for non-recyclable stuff. We also have the same problem - where do you put the bins? We've been stuck with this waste management system now for years, well before these hutches were designed. You'd think they'd have the common flipping sense to design in a place to put the rubbish bins. Especially since if the green Nazis have their way, we might be stuck with even more bins in future for further sorting of rubbish at the doorstep. 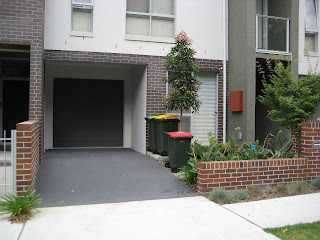 If a home is not designed by an architect, who is it designed by? A monkey? A baboon? A sea kitten? 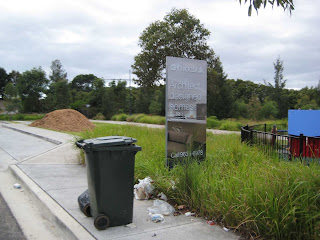 I get the feeling from looking at this sign that the real estate agents responsible for flogging this building have given up. Imagine driving clients down here in your black BMW in order to show them a weed infested site with vandalised signage out the front. By the look of things, work ceased on this half-built block some time ago. Has the money run out? 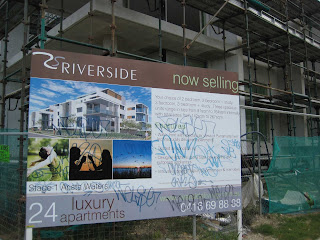 Here we have another view of this apartment block. I'll go back during the week sometime to see if anyone is working on it, but it looks like it has been mothballed to me. 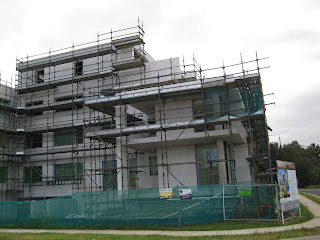 The block across the road, also looking like work has come to a halt. Note the rust on that rebar. 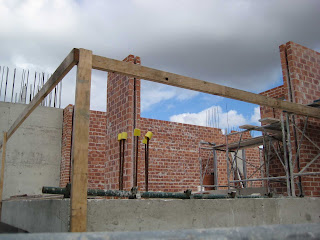 "Riverside living - coming soon" is what this sign says. How soon is soon? This place has no smell of cement about it. All the building sites that I have worked on smell of cement dust. You can smell them a mile off. No such smell was present here. If they're not mixing cement, they're not doing much work. The lack of a cement smell gives it the whiff of gloom. 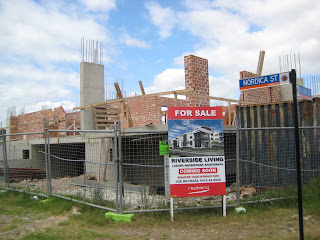 The building sites are also covered with rubbish, which is normal, since builders are a careless, filthy lot. However, there was no new rubbish. All the empty drink bottles lying on the ground had that faded, dusty look. None had that freshly littered look. I think it is a while since a bricklayer took a swig from a bottle on this site and then tossed it over his shoulder.

The surface of the roads is also in a dreadful state - it looks to me like they ran out of money to come back and reseal the tarmac after the building works were finalised. 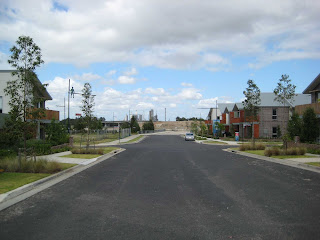 Dead streets. Not a sign of life. Not even any noise from the houses. 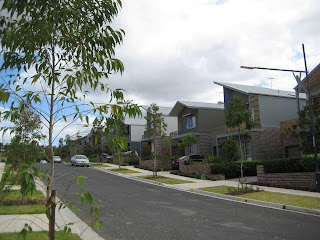 A line of "for sale" signs. Every newly built hutch in this street has a for sale sign out the front. 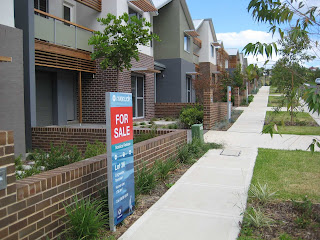 I had a look at the places for sale in this development, of which you can see one here.

With that ad came the photo below. Note how they have cunningly included a ferry in the photo, giving the impression that you can take one to work in the city.

They've also shot it from the west, looking east, so you see all the parkland next door. What they've mainly left out is the great, gaping brown wasteland at the bottom of the photo, which is the dust blown "future development". Buy now, look out over a gravel pit for a decade. 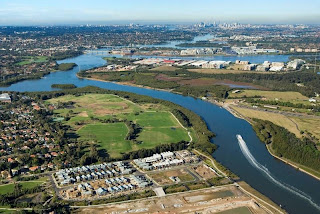 Anyway, it appears that I am not the only one with a less than rosy view of this development.

Apart from all that, it was a great place to go for a ride.
Badly proofread by Boy on a bike at Sunday, January 11, 2009

My builder cleaned the site once a week and cleaned out the house when he was building it. All rubbish was put into two piles, crematable and not. The not lot went to the tip once a week, and crematables were burnt once a week.

He's retired now. He was a good guy, lives in Forest Hill, Qld.

Waste some more of your own time on a bike and go to Asia, have a look at how they live and there building standards and you won't call our builders a filthy careless lot or comment on the buildings as hutches.

If you take a look at the development you have significantly rubbished now you will see:
- Modern apartment blocks, town homes and free standing homes that look attractive.
- Homes that are lived in by mostly owner occupiers (which consist of families and professional couples) that are very happy there.
- A development that has helped increase the value of Ermington.

Also to compliment the estate is a lovely bike path along the river.

For your information the homes are spacious and well designed. They do have effective ventilation and are reasonably cool in summer (without an air conditioner) and reasonably warm in winter (without a gas heater).

An in regards to that dust pit, it looks better than what it did when the naval stores where there.

Instead of wasting your energy writing rubbish use your time for the better good, hmmm maybe by getting a life!

How long have you been flogging real estate for?

PS - my main problem with this site was the enormous gulf between reality and the TV ads that were being used to flog this place.

Hi there, I used to ride through this location almost every day commuting to work. The key thing that happened here was the GFC. No money was available to develop the land for a few years, hence that's why it seemed a bit dead.

I think the remainder of the area is now being developed by defence housing Australia, so it should start to improve. And the cycle path is now open even though its still shoddy.

House prices in the area have increased steadily since your post, so if you bought back then and sold today, or maybe when DHA are improving the rest of the estate, you'd be doing well.

Real estates a bit like that - you have to see the potential. I should have gotten onto the area earlier as its quite expensive now.

At any rate, you should revisit the area, there is now a cycle path that connects meadowbank wharf to ermington park, and it goes through the mangroves, excellent for an easy Sunday ride. Go over the bridge and back through olympic park and Rhodes, its a great loop.

See you out there,
Joel