After gimping up and down the hills of the North Shore yesterday, I was shagged. I stopped at a deli in Milsons Point and bought a small bottle of Coke, consumed a bitof sugar and caffeine, then zipped across the Harbour Bridge before stopping for the rest of the bottle. I occasionally stop in the park at Observatory Hill, which is name surprisingly enough for the observatory on top of it.

Until I had a look at the Wikipedia entry today, I had no idea what the yellow ball on the tower was there for. I now know that it's a time-ball, setup so that mariners in the old days could check their chronometers. The things you find out after lounging on the grass and looking at the sky. 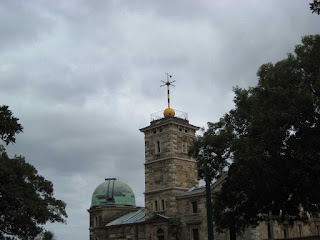 The mast was also flying some flags - I have no idea what they were for, and they didn't look very nautical or meteorogical to me. If anything, they looked very new age. 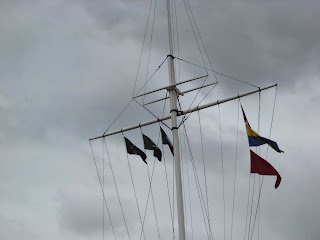 Across from the observatory is the now-defunct toll booth plaza for the bridge. The Harbour Bridge went cash free last week, putting a bunch of toll collectors out of a job. If you ask me, they should have done this 10 years ago. We've had e-tags for long enough. The move to a cashless toll has of course meant that a number of pinheads have decided to drive the long way into town via Victoria Road, worsening congestion on that artery. I'm wondering if the RTA will ever get around to demolishing the toll booths, or whether they will continue to be a pain in the arse for another decade. 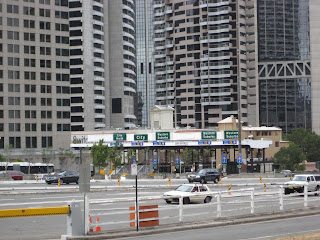 There is a lovely gazebo on the northern side of the observatory, with smashing views of the harbour and the bridge. Around to the left, it looks right back towards the Anzac bridge. This is obviously a great place for a beer on a Friday night, if the beer cartons and empty bottles are any guide. You couldn't walk across the grass without tripping over an empty. 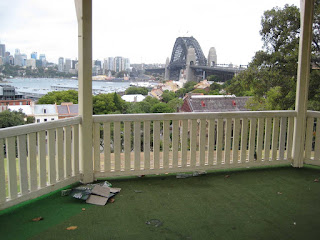 Here is where my rant with rude words begins. The City of Sydney (that's the council to you and me - calling themselves the 'city of sydney' sounds like pretentious wank to my ears) has put up a sign with a long list of "no's" on it. You can't do this and you can't do that. And if you do decide to do something naughty, like pick your nose, you'll be filmed on CCTV. (I looked around, and there is indeed a CCTV camera in this area).

One of the things you are not allowed to do here is drink. 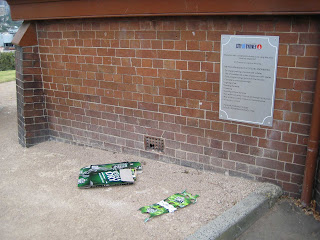 What a bunch of rozzing tossers. This is a magnificent spot for a picnic, or a BBQ (provided you bring your own BBQ), or a sundowner after work. What better place to watch the sun go down, with a beer or G&T in hand, can there be than this? What sort of sawn-off little gerbil nibbling fuckface would seek to ban Australians from sitting here with a can in hand, contemplating the magnificence of this country? Whoever ordered the placement of this sign should be tarred and feathered and dumped in a cray pot for un-Australian activities. Turning overly officious officials into fish food will also raise our collective IQ (and it's easier than exporting Kiwis).

As for the rubbish, I'd replace the "no-no-no-no-no" wowser sign with one saying, "Please pick up your crap before you leave".

And under that I'd write, "Because if you don't, we are going to stick this cannon up your jap-eye". (That's the small Boer War cannon in the photo below). 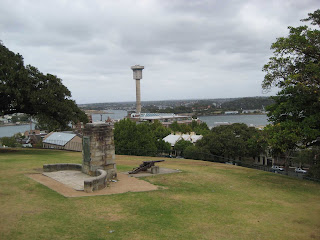 What gripes me most about this sort of petty officialdom is that some wank merchant in the Town Hall has passed an ordinance, and then done sod all about enforcing it. There were a lot of beer bottles on that lawn - people must have been drinking here for hours to make a mess like that. What was the CCTV doing in the meantime? Studying the mating habits of spotted owls? If the idiot operators did spot a bunch of people getting on the turps, why didn't they send in the Rangers? Do any Rangers work after 5pm on a weekday? If not, what is the point of putting up stupid restrictive, inane laws when you don't have any personnel to enforce them after knock-off time?

The poms have finally woken up to the fact that NuLabor has passed over 3,000 petty laws and regulations during its 10 years in power - pretty much one law per day. I suspect many of them are like this one - stupid and unenforceable and they do nothing to improve the behaviour of an out of control underclass. Every stupid new law is another millstone around the neck of the respectable citizen. All they do is make law-abiding people like me believe that we have a Lord Mayor with a fly blown sheep's gizzard between her ears.

Apart from the utterly idiotic laws and signage, this is a beautiful spot to stop and enjoy life. And a nice place to relax.
Badly proofread by Boy on a bike at Sunday, January 18, 2009