I have no particular affection for Dell, or an axe to grind - they make a reasonable product at a good price, and make it easy for anyone to buy one. Who can complain about that?

We bought a PC from them not long ago, our 2nd for the home office. When I bought the first PC a few years ago, I had this idea in the back of my mind that I would eventually like to upgrade to having two monitors - I'd long had 2 or 3 at work, and really liked having a PC setup that way. However, 20" monitors were expensive back then, so I fitted my PC for a monitor, not with. In other words, I upgraded the graphics card to a model that would support two monitors, and then waited for them to get more affordable.

I remembered that when I went through this process with the Dell website, I actually had no idea which graphics cards would support 2 monitors, so I played around with my ordering options. ie, I told the system that I wanted 2 monitors, then sat back and waited to see what happened.

The first screenshot shows where you can select a 2nd monitor. 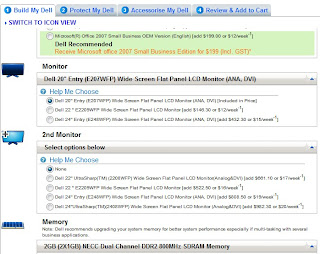 After selecting a 2nd monitor, the site churns away for a few seconds and then comes back and says that the cheap bit of crap that they ship in these things by default won't do the job. You need to upgrade to a better card. And pay more money. Fair enough. 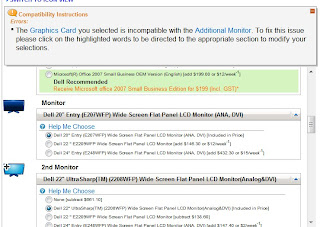 It then shows you what a better card looks like, and what one costs. When I ordered my PC, I went back to the single monitor option, but selected the better graphics card. 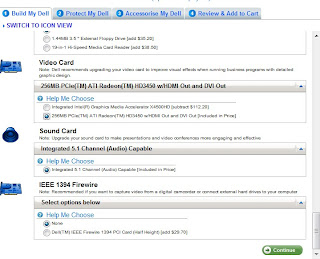 Now, this is the bit to remember - the Dell system is programmed to check your order to ensure that if you select two monitors, you have to buy a card that will support two monitors. It assumes that you are going to use both with your new PC, and not give one to your Mum to use on her old Tandy PC.

When J placed her order, monitors were very, very cheap. Dell had a deal going where if you spent more than a thousand bucks, you could get a 2nd 22" monitor for $99.

If you ask me, that's a steal. It took 15 seconds to get consensus that we should take up that offer.

There was one glitch - due to credit card issues, J had to place the order over the phone (don't ask why, just accept it). So I went through the web ordering process, selected the options that we wanted, then printed it out before we got to the "pay us money now" part and gave the print out to J.

Then I went to work.

I got an email later in the morning to say that a new PC would soon be arriving, complete with 2 x 22" monitors and a free printer/scanner (which we don't need) that they were throwing in.

The big day arrived, and a pile of boxes were soon stacked up in our office. J unwrapped it all and set it up on the desk, where we found that 64 inches of flat screen pretty much fills our shared desk from end to end. She then asked the tricky question - where to plug the 2nd monitor in.

J had spent half an hour on the phone with some guy in Bangalore, he had gone through the same process that I had (twice), and he managed to fuck up the order completely. The logical part of my brain says that if someone is ordering two monitors, you upsell them on a graphics card that will drive both of them. You don't need software to do that. But they have software to do that, just to remove any shred of doubt from the minds of the sales robots that they know what they are doing, or have some choice in the matter. The stupid software system he was sitting in front of should have done that for him without any prodding. Put brain in neutral, do as system tells you.

I did a bit of digging, and discovered that the $99 offer on the 2nd monitor had not been setup properly in the logic of the Dell ordering system. On some configurations, it would grind to a halt and raise its mailed fist and tell you to get a better graphics card. With others, it would let your order go through to the keeper without a peep.

Oops. Somebody fucked up.

So J got on the phone again, and had a very frustrating hour long conversation with half the citizens of Bangalore. She was passed from department to department like a hot vindaloo. Eventually, an order was placed for a new graphics card, with splitter cables.

We ground our teeth a bit, but it wasn't that bad as it meant that I got to use the 2nd monitor for five weeks. At least one of us had a card that could drive two monitors.

I figured out how to open up the PC and fitted the new card, but there was one slight problem with it.

Neither of the splitter cables would attach to the plug on the card.

I then got to spend an hour on the phone, being passed around the streets of Bangalore like a plate of papadums. After much technical talk about ports, pin numbers, part numbers and so on, I managed to convince the person on the other end that they had shipped us the wrong type of card. I can only assume that the warehouse was under pressure to ship us something, so they shipped us something. Just the wrong something.

So I am sitting here typing in front of two big monitors. It's marvelous. One day, another box will arrive at the front door, and all this will come to an end. But until then, I'll just have to make do with the cards life has dealt me.

As for Dell - I don't give a flying fuck about the free printer/scanner that is still sitting in its box under my feet (we already have 2 printers and a separate printer/scanner). I just want you to program your fucking systems properly, and test them when changes are made. Stuff like this should not be slipping through.
Badly proofread by Boy on a bike at Tuesday, January 06, 2009

Dell computers are usually best for all sort of printers am i right? is there anybody who can tell me the best quality Ink and Cartridge for dell branded printer usually i print 300-400 per day in working days.