I don't want to ride on the same road as you

One of the great myths propagated by angry drivers (I need to be where I am going now!now!now!) is that cyclists feel that they have a God-given right to ride on busy roads and slow them down.

Personally, I have absolutely no desire whatsoever to ever, ever ride on a busy road populated with lots of impatient car drivers. I avoid those roads like the plague. I avoid them like a Kevin Rudd speech. I avoid them like root canal therapy. I avoid them like a visit from the Tax Office. You can have your busy, car choked roads filled with road-ragers, unlicenced idiots and street racers. I'm sticking to alternative routes where I can find peace, Zen, Buddha and Nirvana.

Drivers tend to under-estimate the number of bikes out there because cyclists self-select routes that are quiet, yet reasonably direct. If I am in a car, and I have a choice between taking a motorway with no traffic lights, a distance of 10km, yet very busy; versus back streets with 20 intersections, 10 sets of lights and a distance of 15km, yet very quiet - I'll take the motorway. If I am on a bike, the reverse is true. In a very zen-like manner, the most direct and fastest route is sometimes not the best for a bike.

If you did that movie trick of following a car along a busy road, then zooming up and across the houses to a parallel side street, you'd see no bikes on the busy road, yet a line of bikes trundling up the side street - out of sight and out of mind. The odd bike that you see on a main road on your way to work is just the tip of the iceberg (or the tip of insanity in my opinion).

Here's a quadrant using two simple axes - light vs heavy traffic, and a fast road vs a slow road.

The worst place to be is on a fast road with "light" traffic. By that, I mean a road that is generally 2 lanes or more each way, the speed limit is 60 or over and the cars are moving at or above the speed limit. The very, very worst is where there is no breakdown lane, so you have to take a lane from the cars, and the absolutely, utterly crap worst is where you do this on a steep hill, which cuts your speed right down. The Pacific Highway from North Sydney up through Crows Nest and on to Artarmon is a classic example of this - two lanes, high speed, lots of hills - utter bastard of a place on a bike.

I have called this quadrant the "tombstone", because the classic bike vs car crash on a road like this is a bike being hit from behind at speed - generally by a drunk driver, and sometimes after dark. You are trundling along happily, spinning the cranks as fast as you can, then wake up in hospital. 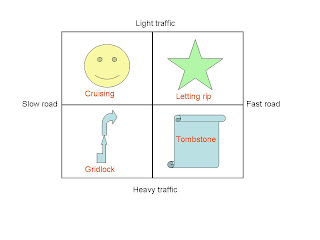 As you can imagine, I stay off the tombstones as much as humanly possible. The only time you'll find me on one is if there is no reasonable alternative route. I don't want to be on that road with you - I really don't. I am not riding on it to slow you down and annoy you - I am there by circumstance, geography, and the reluctance of the RTA to build an alternative path for us creatures on two wheels.

I don't believe we need separate bike paths all over the place. We just need them at certain bottlenecks or choke points where cars and bikes are forced into the same space. Building separate paths willy-nilly all over the city is just a waste of money - what is the point of putting a separate bike path on a quiet suburban street that sees only a few cars per hour?

My second least favourite place to ride is in gridlock. I used to live on the North Shore, so when leaving work in the city, I'd have to ride up Kent St towards the Harbour Bridge. Most of the time, the traffic was two lanes of utter standstill, and it would be like that for long periods of time. With cars parked on either side of the street, it was a four laned parking lot. I hated it because there was little space between the cars, both those that had people in them and those that didn't. That meant trundling along at low speed, wobbling this way and that as I sought out the gaps between cars, buses, taxis, cars and so on. I am proud to say I never hit a wing mirror (although it took some pretty tricky hip work to do that).

Apart from being slow, I didn't like it because of the aggression from some of the drivers. They'd be frustrated at going nowhere, and they'd see me and some others ducking and weaving our way ahead of them. They just couldn't stand the idea of someone else getting in front of them, so they'd move their car to block a gap, or even open their door as you reached their car in order to take you out! Absolute bastards.

So we come to the happy places - back roads with little traffic. I've ridden up and down more backstreets than I care to count. Cyclists are like water in one respect - they'll always find the most efficient path through an obstacle. Once that path has been determined, that route will get a steady trickle of bikes all day - and a flood at certain hours. Lilyfield Road, which runs parallel to the City West Link (fast, heavy traffic) always seems to have at least a few bikes on it - it's wide, fast, open, the road surface is in good condition and thanks to the City West Link, it has few cars on it. The cars have their route, and we have ours, and never the twain shall meet. Everyone is happy. I call that route a "star", because it is fast and safe.

Then we have the quiet, happy places - those with few cars, but not necessarily quick routes. These are the routes where you have to turn this way and that (losing speed and momentum with each corner), and stop on a regular basis at intersections. The road surface might be less than adequate, but they're just nice places to roll through. No stress, no mess, no fuss. Bikes and cars can co-exist in harmony in these places, because the cars are not moving quickly either (the things that slow bikes down slow cars down too), there are no many cars and there is plenty of room and opportunity for cars to overtake slower bikes.

When I plan my rides (as much as I plan them at all), I aim for a route that is 0% tombstone, as much star as possible and happy routes if all else fails. If you are driving, you are quite unlikely to see me, because I'll essentially be in a parallel universe. If you got in your car, we could leave from the same spot, and head for the same destination, but not see each other for the entire journey. If you do get stuck behind me on a busy road, it's not because I want to be there at all. You think I like having cars and trucks whizz past me a foot away from my hip? I'm not insane.

So next time motoring organisations make a fuss about money being spent on bike lanes, think about what I've written. You don't want me on your busy roads and I don't want to be there. The only answer is a bit of infrastructure at some bottlenecks. The alternative is more annoyance by those idiots at Critical Mass.
Badly proofread by Boy on a bike at Friday, January 02, 2009