Hooray for Epping, hooray at last

I humbly present to your photographic evidence that after four attempts, I finally made it to the Epping Road cycleway. I don't think anyone is going to be employing me to lead an expedition to the North Pole anytime soon. I have less navigation ability than a Lebanese taxi driver. 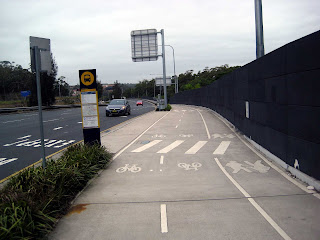 I managed to get thoroughly lost in the back streets of Ryde before finally popping out unexpectedly onto Lane Cove Road - which was a very bad place to be. It's 3 lanes each way, 70km/h (with the traffic going much faster than that) and steeply uphill. I developed a theory as to how some cyclists get hit from behind by cars whilst desperately trying to avoid being clobbered from behind by a car.

On a road like that, let's say you have two cars in the left lane, coming up fast behind a cyclist plodding away in the same lane. Although the leading car has plenty of time to change lanes to go around the cyclist, they wait until the last possible minute to do so - and they may not even bother indicating as they do so - they just amble to the right a bit and sweep past a few inches away from the cyclist.

If the trailing car is tailgating, or the driver is fiddling with the radio or mobile phone or whatever, they have no warning of an approaching bike, and are suddenly shocked to find that the car in front has moved over and they suddenly have the bum of a cyclist filling their vision.

And then the bum of that cyclist hits their windscreen with a loud crunch, and we have another "tragedy" on our hands.

Except it is everything but a tragedy. It is not an accident. It is a completely avoidable collision, brought about by a pair of drivers being idiots.

So if you learn nothing else today, learn this - if you are driving along a road with 2 or more lanes, and you see a cyclist plodding along up ahead, change lanes NOW. Don't wait until you are right up their bum.

[As an aside, if you are driving along say the Hume Highway and you see a car on the side of the road with the driver changing a flat, do the driver a big favour and get into the inside lane. Don't blat past them at 110, with your bumper a foot away from their back. I hate it when people do that. They've got two whole lanes of road, yet they choose to fly past an unprotected human as rapidly and closely as possible.]

The RTA has plastered the cycle path with lots of examples of this amazing "lane changing" signage. The idea is that at certain points, pedestrians can cross the path to a bus stop, pedestrian bridge, shops etc. In some places, the location of where the pedestrians are supposed to walk changes, so the signage is there to instruct them to go from walking on the left hand side of the path to the right hand side. All it did was confuse the hell out of me. I bet they held a risk assessment workshop, and decided that signage like this was required to reduce their liability when there is a crash. Idiots.

The best to stop pedestrians and bikes from colliding is to physically separate them. The RTA has no problem putting up fences alongside roads to stop pedestrians from walking on the road with the cars, but can't see that the same idea makes sense when it comes to two wheeled vehicles and foot traffic. 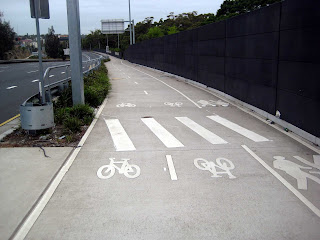 Although this couple appear to be using the crosswalk, they aren't. Just before I took this photo, the woman was walking in the pedestrian lane and the man in the bike lane. Just as I took it, both moved into the bike lane. Idiots. 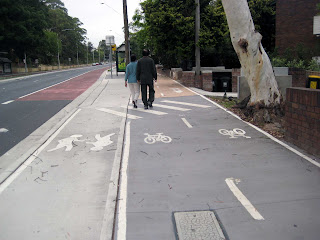 Further along, the cycleway moves onto the "road", and it should be clear to all that the red bit is for buses, the green bit is for bikes, and the bit on the side where the bloke in blue is walking is for blokes in blue who are walking. I bet though that if I hung out here long enough, I'd see people walking up and down the green lanes. And possibly even the red lane. How much clearer do we have to make it? 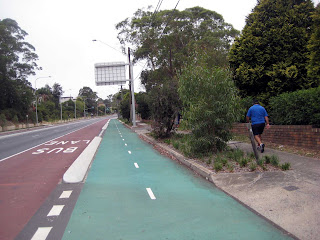 And here we have the dipshit of the week - a lone pedestrian using the bike path across the Harbour Bridge. Spotting these turkeys is just a matter of time - if you wait long enough, an idiot will present themselves. 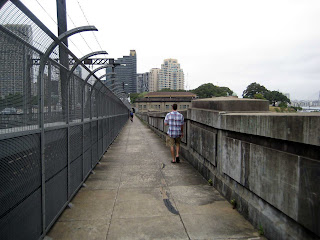 On a happier note, as I was going through town, I spotted a Police car blocking a street down near Millers Point. Being a sticky beak, and having nothing better to do, I went down that way for a look. Last time I did that, I got closer to a shooting at the Casino than I really wanted to be, so I approached with caution. It turned out that the road was closed for a wheelchair race (the next photo is a really bad photo of a wheelchair race, taken from 100 metres away). The Police said I could go through, but I would have to walk - no riding the bike. Since I have a bad habit of slipping over when walking in my bike shoes (because the metal cleats hang out the bottom and turn them into ice skates), I decided that discretion was the better part of valour and tried a zoom shot. Utter fail.

I must say, the Police were doing a fantastic job of discouraging anyone from going and having a look. If you read somewhere that no one is turning up to watch disabled athletes race, keep this in mind. The last time I saw this many Police and barriers, APEC was in town.

Having almost ridden through a Police checkpoint during APEC, I was scanning the rooftops for snipers as I approached the barriers. It's not that we are disinterested in sports like this - rather, it's the modern 'elf and safety culture that is preventing public participation. 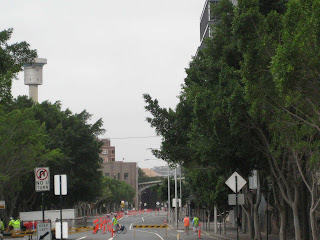 Australia Day banners on the Pyrmont Bridge. Ross, please note - no advertising on any of them. 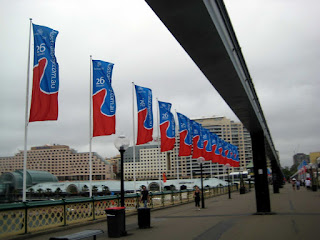 And last but not least, a pair of idiots on two wheels. I love to rant about idiot mums with prams, dog owners with dogs, pedestrians with cloth-ears and no brains and super-aggressive joggers, but these two cyclists took the cake. 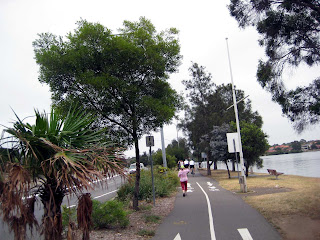 There are parts of The Bay where you put your foot down and fly - those are the wide open bits where bikes and pedestrians are well separated, and where you have about 300 metres of clear road ahead. And there are parts of The Bay where you slow right down, relax and go with the flow. Those are the bits where the path is narrow and crowded with all forms of non-motorised traffic, sight lines are restricted by vegetation and trees, and where the road surface is poor (tree roots pushing up the tarmac).

A sensible person, regardless of whether they are walking alone, walking in a group, walking a dog, running, pushing a pram or cycling, takes note of the conditions and adjusts their speed and position on the path appropriately.

These two were not sensible. They were aggressive, fucking idiots.

They overtook me just as I was about to pass under a bridge. The path was narrow and sharply winding. Sight lines in that spot are very limited by bushy shrubs. You're going from bright sunlight into comparative darkness, and it can be very hard to see someone in front of you in the shadows. I knew there was a pedestrian in front of me in the gloom under the bridge, so I was coasting and preparing to brake if need be.

That's when these idiots decided to go past. The first idiot overtook on a blind corner and nearly collected the pedestrian from behind. Second idiot wanted to keep up with first idiot, so he overtook on a very sharp blind corner. He misjudged his speed and the sharpness of the corner, so he had to cut right across in front of me to avoid going into the harbour. I narrowly avoided clipping his back wheel, which would have put both of us chest first into a coppers-log (treated pine log) fence, and then head first into a shallow, rock filled harbour.

Idiots. Absolute fucking idiots. And they were grown men about my age. Just goes to show that age does not necessarily bring wisdom.

They then proceeded to thrash through the pedestrians like sharks through a tuna shoal, annoying just about everyone walking along a crowded path. No, strike that. They annoyed absolutely everyone they came near.

The pathetic part was that when we finally made it through the bottleneck and out onto the open bike path, these guys weren't that fast. I took it easy through the crowds, so they were well ahead of me by the time they hit the open road. However, I still managed to make up a considerably part of that gap by the time we parted company. They had ridden like idiots, risking colliding with dozens of people, and in the end, they weren't as flash as they thought they were.

Stupid Old Farts. I wish they'd both go and buy a Harley Davidson each and act like tools on the open road. (I bet one is an accountant and the other a lawyer).
Badly proofread by Boy on a bike at Monday, January 26, 2009