Boy admits to being wrong

Once in a blue moon, I do get it wrong. I thought the rebuilding of this path was going to result in a lot of trees getting the chop, which would hopefully lead to greenie head's imploding. 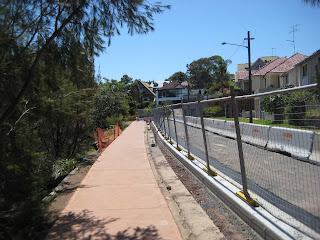 Damn, I was wrong. Instead of chopping into the trees, the engineers are chopping into the road. The temporary fence is sitting on a new gutter, showing where the path will be built out to. That section between the new gutter and the pink path is the bit of road that will be disappearing. That will be made up (presumably) by eliminating the existing bike lane on the other side of the road. Essentially, the road is being picked up and moved two feet to the right, allowing path widening on this side.

The engineers have chickened out though - they're only widening a short section of path, and have stopped just short of the really difficult bit - the bit where they will probably have no choice but to chainsaw some big trees. I guess the money has run out for this year, so unless Krudd decides to stimulate us some more, I will have to wait until next year to see if we can explode some greenie heads (I figure that if you present a greenie with a choice between a tree and a non-polluting form of green transport, their brain will melt down at the idea of having to choose between two different options. Greens want it all, and can't comprehend the concept that many things in life involves trade offs between the lesser of two evils).

Not much recycling is happening on this project either. I thought they'd leave the existing path in situ, and just pour a bit of concrete into the gap on the side.

There is a digger of some sort there right now tearing up the old pink path, so a shiny new concrete strip can be laid along the entire length. Personally, I favour that idea. Bugger having a path in three strips that will suffer in the long term from subsidence, cracking and so on.

But just think of the amount of CO2 that will be released from having to produce all that cement for this path (cement production is an incredibly energy intensive process, requiring lots of heat). It just goes to show that even a green initiative, like a good bike path, requires CO2 producing, energy intensive processes and capital equipment (bulldozers, cement mixers, trucks and so on) that require fuel. Bugger the idea of building this with a pick, shovel and wheelbarrow.

One thing I hate about a lot of greenies is that they decry trucks, cement, cars and so on, but if you asked them to actually build this path using no mechanical aids, they'd quit at the first blister. Twats.
Badly proofread by Boy on a bike at Friday, January 30, 2009