When I was a kid, there were only three types of decorations available for a disco – balloons, streamers and the leftover waste from manufacturing milk bottle tops. I’ve just spent 10 minutes searching through 600 images on Google, and I have not managed to discover the magic key words required to call up those magic sheets of silver and gold tin foil with lots of holes punched in it.

Maybe this was something that was only done in WA, but no disco, or “social” as we called them, was complete without at least a skip full of milk bottle foil hanging from every available bit of ceiling, making the disco floor look like a sparking Bedouin tent. Or the last refuge of a barking moonbat.

I should do a trawl some time through the wilder fringes of the interweb to see if the barking moonbats have developed any solid conspiracy theories about the decline of the proper milk bottle, with its foil top, and thus the removal of a ready supply of free tinfoil from the market.

Was the CIA or NSA secretly behind the move from glass milk bottles to cardboard cartons? Did they want to ensure that moonbats would never have enough tinfoil to insulate their homes from thought control waves beamed from space, therefore allowing large swathes of the population to be convinced that Paris Hilton has style, Kevin Rudd has charisma and Wayne Swan has a clue.

[I’m sure he has a clue somewhere. Mum went through the basement last week and found some stamp albums of mine from 30 years ago. Wayne’s Mum must have made him save the one clue that he collected as a 9 year old, when he was running around in short pants and Bata shoes. I bet he keeps it in a matchbox in a trunk under his bed. Next to his stamp collection, which he is still updating even today.]

In case you are too young to have ever experienced a tinfoil disco, I will try to describe what it looked like. Just remember, it is nigh on 25 years since I last helped to string some up, so my recollections might be a bit hazy.

Imagine the tin foil that you have in a drawer somewhere in your kitchen. Instead of a sheet a foot or so wide, picture a sheet 4 or 6 feet wide, and hundreds of feet long. The tin foil bottle tops were made from foil that would be 3 or 4 times thicker than the stuff in your kitchen – you could still tear it, but it took effort. Now take that big, wide sheet, and punch closely spaced holes in it about the size of an Australian 50 cent piece. The holy sheet that you are left with is your new disco decoration. Climb a ladder and nail it to the ceiling. Let's dance!

Some other memory joggers from that period:

Too young to see the Final Wave tour, but some of us went anyway.

Too young to see Cold Chisel in action, but old enough to be deafened by an ear splitting Jimmie Barnes gone solo.

Will I ever see your face again?

Martha and the Muffins, Flock of Seagulls, Tubular Bells.

The thought that George Michael batted for the other team never crossed our minds.

Bob Geldof will never be a shill for corrupt and despotic third world regimes – he will always be the guy with no eyebrows from The Wall.

Billie Joel had hair. The Eagles had talent. Ozzy Osbourne could walk. Neil Finn had interesting taste in eye makeup. Mick Jagger had no wrinkles. Only 25% of the Beatles were dead.

The Kiss Army were serious. Duran Duran were the biggest thing, ever.

If you put a plastic flowerpot on your head, I know that you want me to whip it, whip it good.

Molly was not a chick in a series of brat pack movies.

All this meandering down memory lane brings me to this photo, which is of an Audi dealership here in wogland. It was built in the last year, just in time for the greatest downturn in luxury car sales in the history of car sales. I imagine that a year from now, it will be a museum to that long lost animal, the person who could afford to buy a new German car. 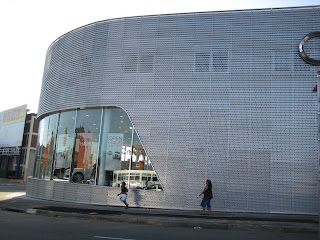 Check out the external cladding though.

If it’s not a museum to the long dead new car buyer, it will definitely have been taken over by moonbats, seeking sanctuary from giant alien space lizards.

Imagine being the idiot manager though that thought that 30% year-on-year growth in Audi sales in Australia could be sustained forever, and that an enormous and ostentatious palace in wogville was required to showcase the brand.