Which of these photos shows a refugee camp?

This is what I think of when I read the term "refugee camp" - this one is in Zaire, taken in 1994. Lots of tents, no permanent structures. Not sure what they do for toilets, but I'm sure it's not pleasant. 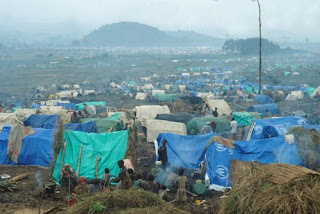 This next photo was lifted from the SMH this morning:

The caption with the photo simply tells us that this is Nizar Rayan, but does not give a location. However, given travel restrictions and so on, I'd presume this was taken in Gaza, and this might even be a "refugee camp".

Overhead, we see electricity and phone lines running on proper power poles. That building in the background is at least 4 storeys high, and could be a Paris apartment for all we know. There are leafy, mature trees lining the streets, which I guess are paved. There are signs outside shops. You wouldn't have buildings like that without running water, and given that a sewerage plant dam failed recently, we can surmise that these places have a sewerage system of some sort.

I think it's time we came up with a better description of these places than "refugee camp". How about "city" or "town"? They're certainly not a shanty town either, like this image of Soweto below. 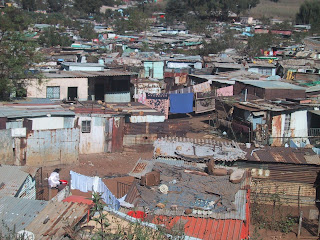 I realise that the SMH and ABC don't want to give up that terminology though, since it is the terminology of victimhood. You don't read very often of Gazan's sitting in cafes, drinking coffee and eating and talking like the residents of Kings Cross (where you can sit on a milk crate on the foot path in order to eat your breakfast).

By the way, this Sydneyphoto blog has a great series of shots from around Sydney. I've been to many of the places that he has photographed, and he has taken much better shots than I could ever hope to take.
Badly proofread by Boy on a bike at Friday, January 02, 2009

Thanks for the mention ...