I have been accused in the past of publishing the backsides of too many cyclists. Well, this is supposed to be a blog about cycling (partly), and the arse end of other cyclists is what you see a lot of when you start riding in company. When in motion, it is much easier to take a photo of something in front than someone behind you - although I do try to take over the shoulder shots from time to time, which generally end up showing either the sky or the back of my shirt. Taking side on shots at speed is really hard, as it messes with your balance.

So you'll have to put up with bums of all shapes and sizes.

Take this bum for instance, photographed in the gardens of one of our railway stations. 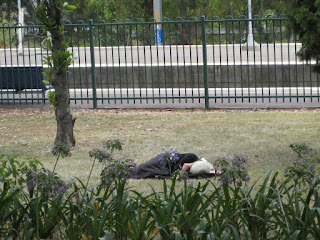 I've been riding around the inner west now for about 4 years, and this is the first proper bum I've seen. I ride through a lot of parks, sometimes quite early in the morning, and until now, I've never seen someone sleeping rough. Either they are all ex-snipers, and are sleeping in their giggle suits, or there simply aren't many out this way. Take your pick. The charities of course will tell you that you can't walk through a park without tripping over 10,000 homeless people (so give us your money) - but I say this: where is your evidence? Go out with a camera one morning and photograph every homeless person in our suburb.

Can't find any? Then take your begging bowl and fuck off back to your nice office, which absorbs anywhere up to 80% of our donations.

That taken care of, we resume normal service with some bike bums. A couple of older guys (like me). 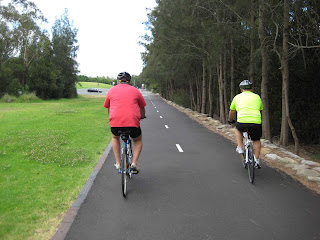 The newly rebuild Armory Cafe at Newington - the old one suffered an attack of arson and burnt down to the foundations. Last time I was out this way, this was a fenced off building site showing no signs of progress. Today, it was full of cyclists. There is good bike parking here, and plenty of it, but they've clearly underestimated demand, because bikes were leaning against every vertical surface. This means it might make good coffee - must try it next time I am going past. 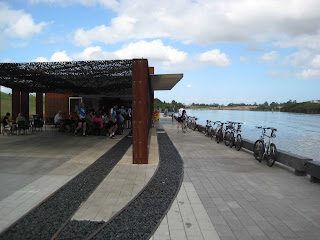 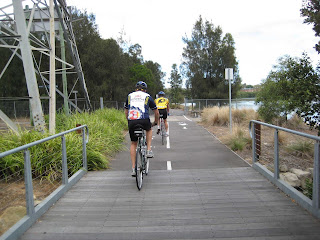 In one of my recent posts about education and increasing enrolments, I noted the recent rapid growth in population out Homebush way as a result of the construction of a huge number of apartments. There are dozens and dozens of blocks like these, built on what used to be a toxic waste dump. The mosquitoes out this way are horrific, since the government stopped spraying some nasty chemical over the nearby mangrove swamps. Never venture out this way after dark without wearing neck to ankle to wrist clothing, and then dumping a can of Aerogard over your head. 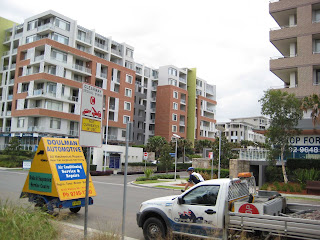 Some speedy cyclist bottoms. I managed to hang onto their tail for about a kilometre, and then they killed me. I haven't been out for a few weeks, and these guys were cranking along at about 37km/h. Too much for me. 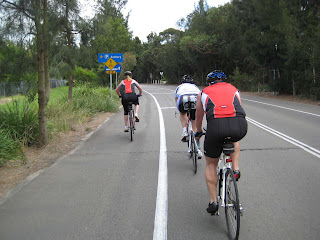 Don't see many of these - by that, I mean female cyclists in a hurry. Many women tend to approach cycling like they approach shoe shopping - in a leisurely and unhurried fashion. This is the odd one out. 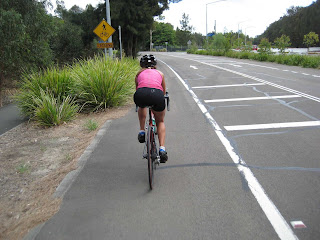