We're only making plans for Harold

I have some more advice for Harold Scruby and his fax machine, which is along the lines of STFU.

I criss-crossed the Harbour Bridge yesterday for the first time in months - certainly the first time this year. It's funny to think that four years ago, I was riding across it every day on my way to work. Now, it's a foreign land.

Which suits me fine. Between the cyclists and the pedestrians, there are 8 lanes of traffic, two big fences and two railway lines. You'd think that would be enough to separate the two safely, but for some pedestrians, even that is not sufficient. 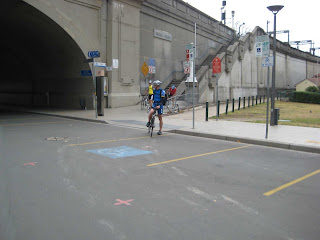 Until a few years ago, there were always idiot pedestrians who ignored the signs and walked across the bridge on the cycle path. I once encountered a large (Japanese) wedding party, complete with photographers, completely blocking the cyclepath.

But before I took up cycling again, I used to walk back and forth over this bridge almost every day for a few years. In all that time, I never saw a cyclist on the pedestrian side. Cyclists are very good at keeping away from dedicated pedestrian paths where a bike path is provided, but some pedestrians are like goats - they go wherever they want, without regard for anyone else.

The only reason why you rarely see pedestrians on the bike path now is because it is patrolled around the clock by security guards. 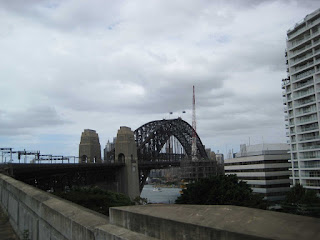 I stopped before the "bridge proper" to take this photo of the swimming pool beneath the bridge (I used to swim here a lot as well). A security guard strolled up and, very politely, told me that I couldn't stop on the bridge as it was a dedicated cycle path. I could slow down and take photos, but not stop. 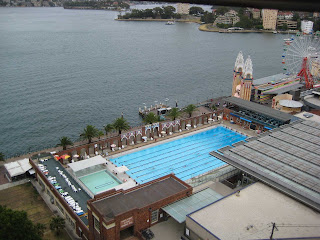 As he approached, I thought of the cases in the UK where even politicians have been arrested under anti-terror legislation for taking photos of cycle paths. For a moment, I thought I was done for. Then the guard smiled, very gently told me off for stopping, and wished me a good ride. I took the next photo once I was rolling - up near the brow of the bridge is another cyclist passing the second guard. I think they walk a certain distance apart so that they can cover the entire bridge between them. 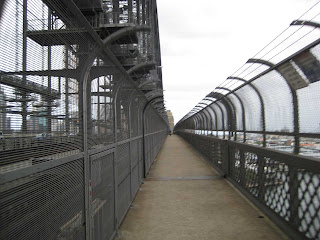 So here's a thought for you, Harold. The Harbour Bridge shows us the way forward. The problem is not cyclists intruding into pedestrian space, but pedestrians intruding into cycling spaces. The only way to prevent pedestrians from being ignorant, obnoxious, cow-headed, anti-social gumbies is to employ security guards to police them. Every pedestrian should be licensed and forced to display a number plate, with the licensing fee being used to pay for the security guards.
Badly proofread by Boy on a bike at Sunday, January 18, 2009