Damn this bloke on the fixie was quick. His legs were something else - watching him pedal, it looking like a bunch of fat pythons were having a root under his skin. I sat on his tail for all of half a minute, and then I was spent. Gone. Rooted. 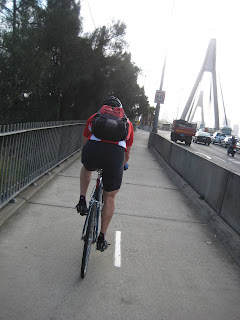 Nothing like having the advantage of rolling into a green traffic light to jump the group. Wouldn't have made much difference, as the last two in this pack were complete hubbards.
Check out how fast the guy in front is pedalling - that's what it looks like when you're doing 50-55km/h on a nice downhill. His lead didn't last though - like many a cyclist on this route, he failed to apply enough power going up the next hill, and he was easily reeled in.
Badly proofread by Boy on a bike at Tuesday, November 17, 2009