Man, I wish I had a head mounted video camera so that I could capture more of the stupidity that I see around me each and every day. For instance, the driver of the dark car on the right heading towards me had a mobile phone in her left hand (clamped to ear) and a cigarette in her right hand - and she was waving the cigarette around as she talked with her hands. Neither hand was anywhere near the steering wheel. And we wonder why the death toll on the roads stubbornly refuses to decline. 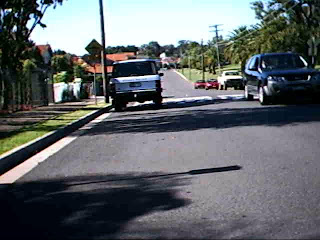 A near wipeout with a bike courier who was going way, way too fast for his own good and mine. The speed limit in this spot is 10km/h - no one on a bike goes that slow (I get the wobbles and almost fall over when going that speed), but we generally don't exceed 20km/h, which is a reasonable pace given the plethora of pedestrians in the vicinity. 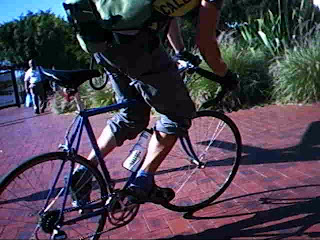 This dick was going much faster than that. He was riding "furiously". He needs to have "fuckstick" stamped on his forehead.
Badly proofread by Boy on a bike at Tuesday, November 10, 2009