In the beginning, we start at the end. Here's a nice view of The Bay. I sat on a bench here, watching the birds diving for two-headed fish whilst fixing a flat. I put a brand new puncture proof tyre on last weekend, and it lasted four days before Sydney's awful roads taught it a lesson - "Your fancy, hand made German tyres are for wimps". 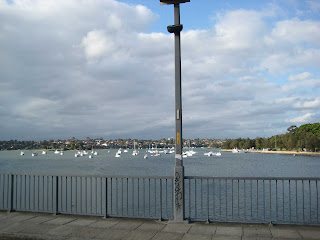 The double pannier look. Panniers are becoming more and more noticeable. When I started commuting, most people wore a backpack at most, using it to carry a clean shirt and some socks and jocks. Now, I see enormous panniers that could be used for a continent crossing expedition being lugged too and from town bolted to many a bike. I subscribe to the old rule that the bigger your backpack, the more crap you'll pack into it. I purposely bought a small pannier for the bike in order to keep my load as light as possible. 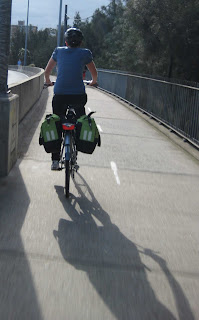 I get the feeling that this bloke was commuting to a job in Balmain. He's dressed in his work clothes - right the way down to his black shoes. 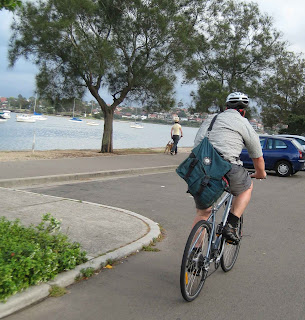 Yakking on mobile phones whilst on the road is not the sole preserve of drivers. 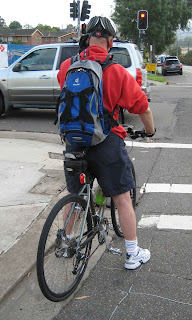 I always have a quiet chuckle when I see earth moving machinery strapped to barges for work around the waterways. It looks like the boat launching deck at the UTS rowing club is having a bit of a facelift. 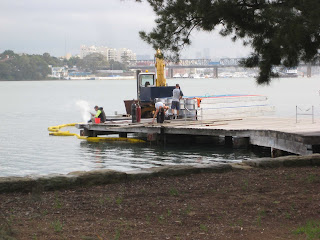