Want to know where this Green madness is taking us?
Look no further than Leichhardt Council, home to a bunch of deep-left Greenatics.
Earlier this year, the council did some work on their section of the bike path that goes around the Bay Run. I watched trucks pouring concrete for days on end, hoping that a gravel section of goat track was finally going to turn into a world class bit of of infrastructure.
I should have remembered that if you give a Greenie a project, chances are they'll completely fuck it up. Here is what the path should look like end to end (the pink stuff is the freshly poured concrete): 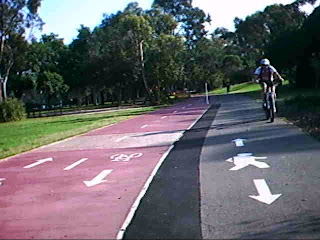 It seems the budget ran out halfway through, so this is what half this section looks like - rough gravel that floods in winter, and is of no use to roadies like me. 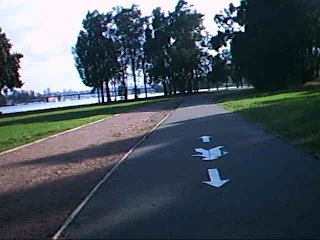 Why is this so?
I checked the Leichhardt budget, and on page 15 found these numbers:

Budget and Parking Management Taskforce
Bicycle plan works additional funding - $265k, dropping to $255k next year
Carbon neutrality additional funding:
2008/09 - $59,000
2009/10 - $118,000
2010/11 - $177,000
2011/12 - $236,000
Environmental education increase
2008/09 - $53,648
2009/10 - $54,616
2010/11 - $55,617
2011/12 - $56,817
Over the next 4 years, council will spend $1.285m on bike works. During that same period, it will spend $810,000 on useless green waste-a-thons. If they spent that money on bike paths, they would get 66% more paths.
Now I am not your typical wooly-headed bike riding, tofu eating, mental patient environmentalist. But I get the idea that if you build good bike paths, more people will ride bikes. If that is your idea of a good environmental outcome, then surely you'd want to maximise the number of cyclists, and in order to do that, you need to lay as much concrete as possible in the form of bike paths. But those window licking Greens on council think that they'll get more people to ride bikes by printing leaflets extolling cycling and putting hanging banners from lamp posts. Sorry, fucktards, leaflets will do nothing. Forget the paper - lay concrete.
To add insult to injury, Leichhardt Council proudly boasts that it uses green electricity. Their bill is now over $1m per annum. Since we know that green power is 10% more expensive than the coal fired stuff, we can presume they are pissing another $100k of ratepayers funds up against the lamp post in the form of green power. If they stuck to coal fired power, over 4 years, you could add another $400k to the bike path budget.
In other words, you could double your bike path budget if you dumped these insane Green fantasies. That bit of gravel in the above photo could be concrete by now if the Greens grew up and got real.
Another way of looking at it is that those idiotic Greens have cut the bike path budget by 50% to pay for their indulgences.
What a completely fucked outcome that is.
It's almost as bad as this crap from Howard "knobhead" Scruby and his gaggle of money-grubbing ambulance chasing lawyers.
Badly proofread by Boy on a bike at Friday, November 06, 2009