Seven photos from the saddle

The humidity this morning was appaling. The cloud base was so low, planes coming in to land were obscured until the last minute by the clouds. This one was on final approach, but had only just popped out through the bottom of the murk. We get an interesting phenomena around here when the clouds are like this where the plane starts streaming two or four contrails as they hit a particular point in the cloud. However, unlike high altitude contrails, these are dark grey or even black. I have never managed to photograph one. 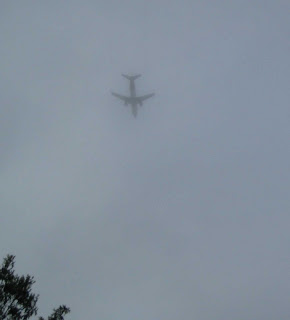 Know how this feels. Why is it always the back tyre that blows, which involves removing the chain, which means getting gloopy black chain gunk over every bit of exposed skin? 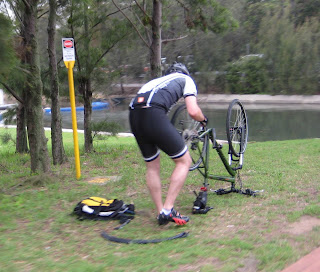 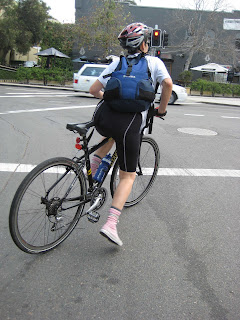 A very serious cyclist. He takes this gig much more seriously than I do. And seriously, who wears white shorts? I swear I could see his hairy bum hole through the fabric when he stood up and took off. 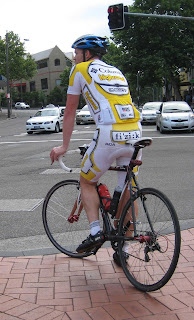 Knob jockey of the week - and it is only Monday. This thrusting ball monkey in the M3 decided to tweak the power pedal as he went past me, obviously signalling his annoyance with being stuck behind me for 1.3 seconds. As I went past him at the lights, I noticed he had mobile phone glued to ear. If the owner of BKW 02K can afford an M3, why can't he afford to install a fucking hands free kit? Is it because he is a screaming fuckface? 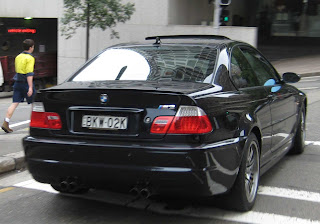 A pair of fixies, with the front one pulling a track stand. These two were quick, quick, quick once the lights changed. Had a hard time catching them. Then again, if you add the age of both of them together, you might get close to mine. 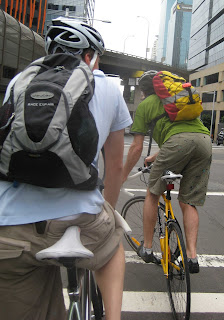 Girls, what is it with modesty pants? Look - when I have been belting along as fast as this old carcase will carry me, with sweat running into my eyes and pouring off my nose, with the lungs burning and the eyeballs closely watching the road surface for pot holes, rubbish and darting cats, and the ears alert for approaching ball-gobblers in M3s, the last thing I have on my mind is looking at your arse. 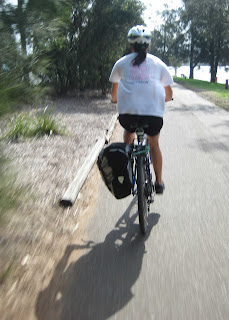