Worked late last night, so I was late to rise and leave for the big smoke. The sun was well and truly up by the time the rubber hit the road.
Being out so much later than usual, I saw some species of cyclist that are never seen at zero-dark-hundred; teenagers.
Here is a pack of three of them; hunchbacked mutants on their stupid little monkey bikes. They pedal like crazy on these single speed, small wheeled contraptions and never seem to make any useful forward progress. They also gaggle in such a fashion as to block the path for the faster members of the cycling clan - I thought about saying something, but it was more interesting to hang back and observe their style.
They thought they were cool. I thought they were muppets. 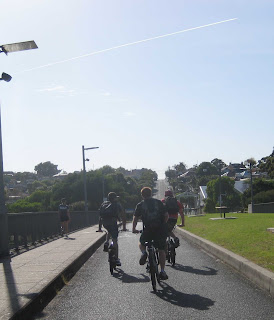 A rapidly growing genera - cyclist relaxist. Casual work clothes, casual shoes on the feet, upright, laid back bike that - horror of horrors - has a kick stand. I should mention that in the road bike fraternity, the kick stand went out of use about the same time as Jimmy Carter. 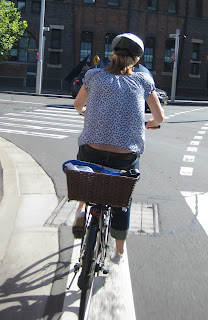 I find the growth of these relaxed cyclists to be comforting - it means the hardened road warriors who paved the way in making cycling acceptable are being followed by a much larger wave who have stuck a toe in the water and decided that they can in fact ride to work without being squished by a bus - unless they live in the northern suburbs. The early adopters are now being followed by what I hope is the early majority. 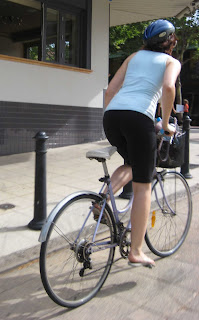 Here's another relaxed cyclist - the bike frame and the mudguards totally give it away to frame-aficionado's like me. And the thongs on the feet.
The thing is, these relaxed cyclists move at about half the pace of those of us in the lycra crowd. Yesterday, the Telegraph ran a story which was one long whinge from motorists about being held up on the road by "lycra-clad fanatics". If motorists think being held up by a lycra clad loon like me is bad, when I can move at 50km/h on the flat in good conditions (which is the speed limit on most streets around here), wait until all these casual non-lycra cyclists hit the roads and start cruising around at 15-20km/h.
When that happens, angry motorists will look back on the days of lycra cyclists as some sort of golden age of motorist/cyclist harmony.
Badly proofread by Boy on a bike at Thursday, November 19, 2009

BOAB - Can't help thinking that if you signed up with these guys and took your camera you'd get enough material to make a documentary - http://www.veloasia.com/library/stories/cycling_vietnam.htm
I did a little bit of cycling in VN during my last visit in 2007, and had a ball.

Then again, it is from Target.