This is an unusual photo for me. It shows something that was behind my direction of travel. 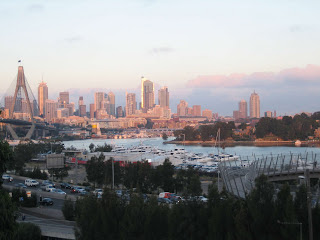 I've posted photos before of what the city looks like in the morning at sunrise, but that's because I have been riding towards it. I have never taken a photo of the city at sunset, because I'm riding away from it.

You have no idea how much willpower it took to stop, turn around and take a photo. One must always be forging ahead at full throttle, not looking back.

Still, I'm glad I took it. It looks quite unreal - too much pastel colour to seem like a proper photo of the CBD.

If there's any blurring, I blame the pedestrian/bike bridge that I was standing on when I took this photo. A rather slight woman was jogging up the bridge towards me, and I swear the thing was bouncing up and down by several inches. I thought I was on a trampoline instead of a concrete overbridge. It's odd how even the most solid looking of structures can react to a bit of up and down motion.
Badly proofread by Boy on a bike at Friday, May 09, 2008