Here's an example of an environmentally friendly car. Note the tree branch that someone has tossed into the back seat. 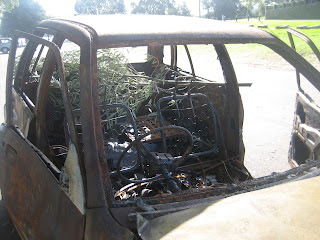 As for Co2 output, consider the fact that this is a small hatchback that was probably quite economical to run in the days before it was burned to a crisp. But how much CO2 was put into the atmosphere when some vandals decided to torch it?

Also consider that the "young" are supposed to be more environmentally aware than us old farts, but old farts do not generally run around setting cars on fire for the heck of it. Did the youngsters who set fire to this car sit down and consider the environmental impact before doing so? (Did they fill out a 10 page risk assesment either?)

I doubt it. Whenever someone claims that young people are greener than us oldies, I want to retch. Youngsters are unthinking, narcistic little buggers with no impulse control, and they do much worse things to the planet than those of us that have started to slow down and wheeze.
Badly proofread by Boy on a bike at Tuesday, May 13, 2008