If there's one thing a bike gives you, it's a great view of what's going on in the world.

I was on my way home this afternoon when I ran into a snag - a few streets blocked off by the police down towards the Casino. It turned out that there had been a shooting at the casino, and the police were hunting the gunman. 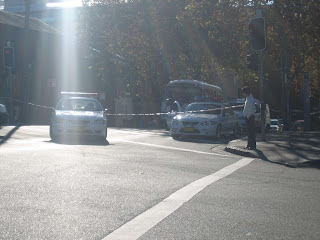 The police were really out in force, since the PM was also in the area, and it wouldn't look to good if he copped a round. I of course had no idea what was going on - all I saw was lots and lots of police cars going to and fro, and several taped off streets. 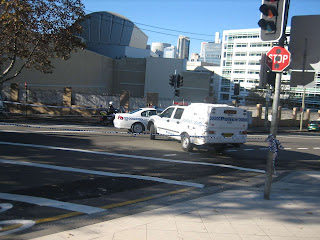 I was half tempted to cut through the back streets to have a closer look at what was going on, but thought better of it. If the police want you to stay out, it's generally not a bad idea to sod of somewhere else. It wasn't until I got home and had a look at the papers that I found out what had gone down.

As I've said before, one should ride with a bit of firepower. And not just to deal with dickheads in cars.
Badly proofread by Boy on a bike at Thursday, May 08, 2008