Detail of a loonie bin

I ride past the old Callan Park loonie bin most days. It's easier than slogging up the hill that is Lilyfield Road, and I'd rather take my chances with an escaped insane axe murderer than some of the drivers that howl up and down Lilyfield Road like demented demonic dementors.

The loonie bin is in a sad state. Most of the loonies got kicked out some years back, and the state government has been trying to turn the whole place into lavish high rise apartments ever since. Who would you prefer as your neighbour? A bond trader with a nice Mercedes and a blonde trophy wife, or a bunch of smack-snorting "artistes" attending "writers workshops" and a crowd of listless and homeless loonies trying to get back into the only home they've ever known?

Funnily enough, the inhabitants of Leichhardt would prefer to live next to people that think it is normal to poo in their pants. The lavish apartments are as popular with the locals as turd-panted nutbags at a dinner party. The result is that the place is rapidly falling apart. I took this photo because I was interested in this particular architectual feature - the window thingy on the roof. But after getting home and looking at it more closely, I can see that bits of wood are starting to come away from the window sills, and the whole thing needs a good coat of paint. 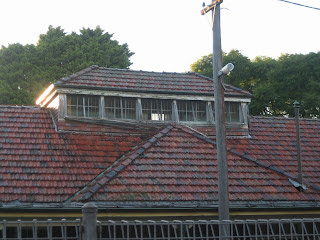 The locals are doing their best to delay the inevitable, but the way things are going, in a few years time this place will look like Rome after the Vandals and the Visigoths dropped in for a drink. None of them will lift a finger to keep the place in any form of repair - the local nimbys restrict themselves to putting a compassionate protest sign in the front yard and perhaps a group photo op for the local rag. The thought of them actually doing some work themselves to preserve that which they are trying to keep is as alien to them as shaving their legs.

They do have a simple answer as to who should be doing the work - the Government of course!