Victoria Road is a really, really busy road. It's a road that I'll never ride down, not even at 6am on Sunday, because it is always crowded with fast moving aggro drivers. Except at peak hour, when it is wall to wall stalled aggro drivers. It's s stretch of menace. 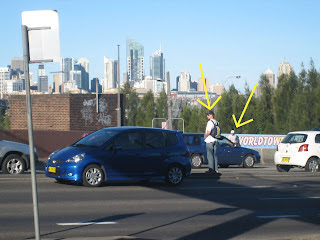 How did I know they were drunk?

Each was holding a schooner of beer. No idea where they got that from - there are no pubs in the direction that they came from. But they looked like they had scoffed a dozen or so schooners each during lunch (I only did a half day today - this photo was taken before 3pm).

The utterly crazy thing is that they crossed the road directly under a pedestrian overbridge. The lazy sacks of shit could have safely and drunkenly weaved their way over the footbridge, but Mr Bravado (the bloke already on the far side of the road) decided that he could cross six lanes of hassling traffic without getting run over.

Unfortunately, he was correct. I was told once that something like 90% of the pedestrians that get run over are drunker than the drivers that hit them. These guys seemed to be about to prove that rule.

All that they got though was a near miss. Mr Drunken Bravado tried to have a go at the car that nearly collected him, screaming "I'll have you, you fucking wog" at the departing vehicle.

If they'd been hit, I would have walked over and asked, "Does it hurt?"

If the answer was yes, my reply would be "Good", before walking off and leaving them there.
Badly proofread by Boy on a bike at Thursday, May 08, 2008