I had to pop over to Lane Cove this morning to do some stuff, and that meant driving, as only the insane would try to ride over there. I have tried to do it a few times, and have given up halfway there because of the lack of a safe cycling option between Hunters Hill and Lane Cove.

Looking at this map, which I nicked from Lane Cove Council, I would be coming up from the bottom left hand corner. The red lines indicate cycle routes, and there is a complete dearth of them down my way. There is only one way to get across to Lane Cove, and that involves going along Burns Bay Road - which is a busy, fast, uphill road with two lanes in each direction and absolutely no room on the side of the road (as in a breakdown lane). The footpath is a hopeless option as well. In short, it is cycling hell, and I am not keen on cycling in hell. 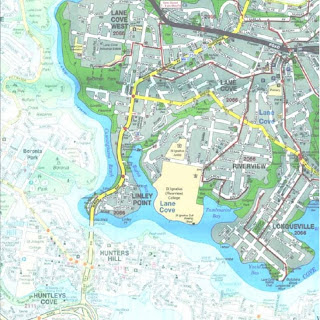 I did spot one woman attempting to do it this morning. That's her on the far left, trying to to be squished by delivery trucks and impatient drivers. I would think about doing this on Sunday morning when the traffic is a bit calmer, but buggered if I would venture out on a weekday during peak hour. 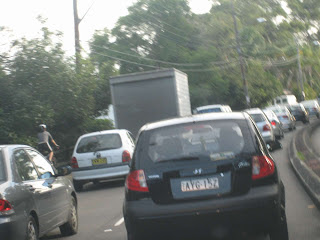 The thoughtful people at Lane Cove Council have provided a lockup bike storage bin at the shopping centre..... just the one, and they haven't made it particularly easy to use. 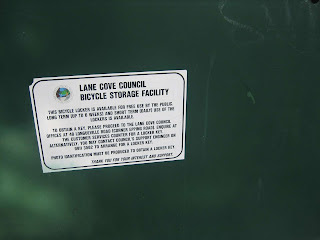 The insane thing is that there is a very popular bike shop less than 100 metres from here - it's where I buy most of my bike stuff. There is a constant stream of bike-bound customers going to the bike shop.... but nowhere for them to park their bikes. The bike shop in question does not sell cheap bikes either. I would have no problems with just chaining a $500 shopper bike to a lamp post whilst I ducked in to a shop to buy something, but I wouldn't leave a $3,000 bike out on the street. Some of the bikes that leave that shop are more valuable than the cars parked in this car park. You need somewhere secure to park them, and that means a fully enclosed cage with a proper lock on it. 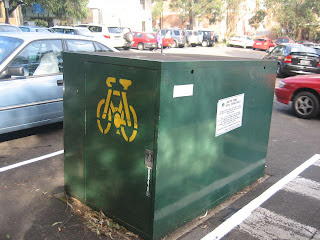 The second insane thing is that the carpark where it is located has at least 100 car spaces, and there is plenty of other car parking around and under this shopping centre. You'd think the council could stump up for more than one measly bike locker. How on earth do they think they're going to encourage more people to ride when the locker facilities are so pitiful? I wouldn't ride there because with only one locker, I'd guess that my chances of getting it are about zero. If there were 10 lockers, I'd figure that I'd probably get a locker everytime I went, so I'd give it a go. 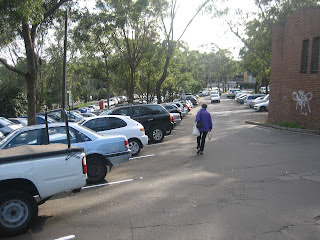 Until these dodos lift the ratio of bike to car parking from something like 1:500 to say 1:10, no one is going to be encouraged to ride.

The council of course makes a big thing about being green, sustainable and abo-friendly. I guess that so long as they wave the right symbols around, they don't have to bother about taking any action.
Badly proofread by Boy on a bike at Thursday, May 01, 2008