Here in NSW, the land of liberty, there is a long list of cars that people on P plates are not allowed to drive. I looked it up the other day, and it was at least 10 A4 pages long. It seems that anything with 8 cylinders or more grunt than a ride on lawnmower makes the list.

If you ask my humble opinion, it's entirely possible to kill oneself whilst riding in a shopping trolley (I refer to a car similar to the Barina, although you could choose to take the literal meaning). I believe that safety on the road is 90% attitude and 10% the car that you are driving. Put a granny in a Porsche, and you are likely to have a safe, slow moving granny. Put a tool on a ride on lawnmower, and you have potential chopped-up violent death. (I write this with the experience of rolling a ride on lawn mower whilst executing the lawnmowing equivalent of handbrake turns).

If I was compiling a list of cars that P-platers should not be driving, I'd make it a one lined list. That one line would say:

"A P-plater shall not drive any car that looks like it will be driven in a dick-headed manner".

For all I know, this cock-mobile may in fact be legal conveyance for a P plater, but in my book, it is a four wheeled coffin for a young man with a tiny little cock. 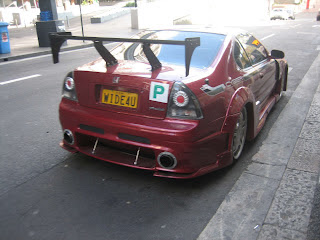 So here is my annoyance for the day. 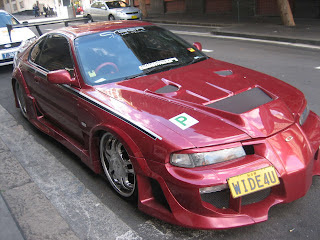 To start with, I am ticked off that our ham fisted government of bed-wetting numpies has seen fit to infringe on the liberty of fucktards by limiting the stupidity of the vehicles that they might ponce around in. If you want to cruise around like a wingnut with no balls, I am not going to stop you. However, I might open fire if you decide to parade up and down my street with the techno blaring and the fat pipes rumbling.

Apart from that, it gets up my nose that you can park a moving infringement notice like this less than a hundred yards from a major Police station, and not one Plod noticed that, like duh, this pile of pus might need checking out. A Plod car actually cruised past as I extracting my camera from my pocket. Not a single Plod in the car looked in the direction of this bucket of fly-attracting turds.

So much for Cops being observant.

I hate poseurs who drive things like this.... but I hate politicians who strike a pose when they make useless laws to ban them.
Badly proofread by Boy on a bike at Saturday, May 24, 2008