What's on the other end of this network?

A journo posed a question to one of Kevni's flunkies the other day that went along the lines of, "What is at the other end of the fibre?" The flunky had no idea.

I'll see if I can explain that.

A bit of fibre is useless unless you've got little pulses of light zooming up and down it at high speed. In order to crank up that light, you need a switch that contains a GBIC - a fancy name for a nifty little laser pointer.

Let's say your suburb is being cabled up. Each house has a pair of fibres pulled to a point somewhere in the house. At the other end, all those pairs are aggregated in a building like an Exchange, and at that point, they are connected to a big fuck-off switch like this one from Cisco - the 6513. 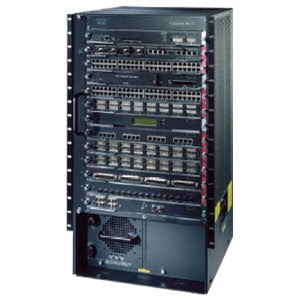 This thing is the size of a big bar fridge, and it costs more than a small apartment. I will go into that in a second.

Here is one cabled up with copper cabling - it wouldn't look much different with a great mass of fibre attached. I won't bore you with all the rigmarole of fibre terminations, patching cross frames and the like. 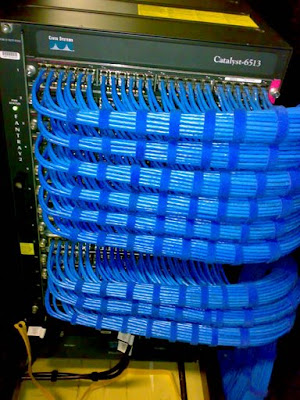 In order to price one up, I visited the Express Data web site. All prices are quote at retail and include GST. I'd expect OneTel Mark II will get a 50% discount due to the volume of gear they will be buying, but lets go through the cost of just one of these switches:

Ouch. Let's add that lot up - $823,000, and I am sure I have missed some memory and licenses, and this does not include another 10-15% on top for maintenance and support.

Now then, we are talking about wiring up say 2 million houses. If each switch does 200 houses, we need 10,000 of these out in the field.

After that though, what do these connect to? I included two x 4 port 10GB modules on the assumption that each switch will have a pair of 10GB uplinks to another pair of switches one level up (in case some idiot puts a backhoe through one fibre uplink, your traffic will run over the other uplink. Modules also fail, so if one 10GB module fails, you traffic runs on the other - everything about this switch is redundant - apart from the last mile link to your house).

The thing is though, they might not bother running 10GB uplinks from each node - 1GB might be enough. But what is the point of running 100MB to each house and then having 216 of them sharing a 1GB uplink?

Wouldn't you love to be the salesman collecting the commission on that sale?

The 460 mid-tier switches then need to link into the core, where you need another 2 dozen to complete the picture. Let's call it an even 10,500 switches at $400,000 each. The cost for switches alone comes to $4,200,000,000. Call it $4.2 billion for 2 million homes, or $2,100 before you have laid an inch of fibre. Of course the entire network is unlikely to consists of this model or even brand of switch - I have simplified things terribly just to provide some base costings.

There are 7 million houses in Australia, plus lots more business premises. I can see $16 billion being spent importing switches from China if you want to run fibre to 90% of them.

Notice I have not added a cent for the racks and data centres and air conditioners and backup generators and backup batteries and alarm systems and all the rest required to house all these switches. I also haven't added a cent for all the fibre required out in the street, plus all the patching that each data centre will need. Not a cent has been included for design, installation, project management, electricity, maintenance, security, network operations centres to run it all from and so on. Then you have networking monitoring, billing systems, a help desk/call centre and blah blah blah. Big money pit.

I'm starting to see where the $43 billion number came from.

I am wondering though whether they will actually run the fibre in and terminate it in each house, or just terminate it in a pit out in the street and only run it in if the household requests it. If the fibre stops in the street outside your front gate, you might not consider it fibre to the home, but Kevni would. You see, he has said nothing about running fibre into the home.

Now, what do you need at home to connect to this network?

At present, you can buy a nice little ADSL router with wireless and 4 network ports for $140.

The GBIC alone that you will require to light up your fibre termination will cost over $300. All that gets you is a fancy laser pointer the size of a small eraser - you still need to connect that to something, like a router with wireless and 4 network ports. At present, I can't find anything like that on the market in Australia. The closest I can find is a switch that will accept a fibre connection for $600 (into which you then insert a $300 GBIC) and if you want wireless, you then connect your wireless router to the new switch.

So that's $1,000 for networking kit at your end and $2,100 at the "other" end and an unknown amount to provide the fibre in the middle and put that "other" end together.

How many people are sitting at home right now getting ready to pay that sort of money?
Badly proofread by Boy on a bike at Wednesday, April 15, 2009