Kids these days don't know how to binge drink properly

School excursion to Rottnest Island, 1984. Our house was awash with king browns of Emu Export Lager, baked beans and V.O Invalid Port (chateau goon) - we were all 17 or so at the time. The teachers that accompanied us were in another rented house down the road, getting blitzed on the same beer and possibly a better brand of port. It was a male-only expedition. 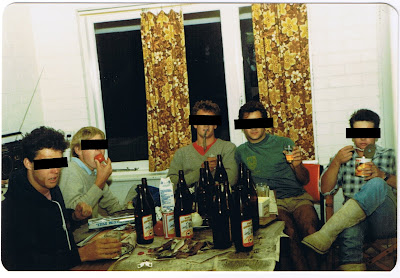 Yes, the well dressed bloke in the middle has a fish dangling from his mouth.

Note the old fashioned, original ugg boots on the far right. The curtains are also a major fashion statement. Australian Crawl would have been blaring from the stereo in the far left corner. If I published the next photo in this series, you would see everyone smoking.

2nd from the left ended up flying Blackhawks, and was supposedly grounded after flying one under the Narrows Bridge in Perth, scaring the SAS troopers on board so much they complained about him. There is not much room between the water and the bridge. Far right ended up as a captain with a US airline. 2nd on right is a Captain of Industry. Not sure what became of the other two - probably a doctor and an accountant.

Oz Crawl - now you're talking my language. I saw a documentary on ABC recently - I think "Long Way to the Top" and they never got a mention. They are a band who have not received their due.

I'm not sure what to say. Really I'm not. It's comforting to know that you mostly all turned out alright in the end. Mostly.

Mind you in the same year I managed to 'lose' a friend at the Floreat Hotel while on day leave. Sneaking her back into the boarding house in the wee hours after we found her was a little tricky.

And we worry about our young.

Probably my biggest recollection of that trip is a story of a suicidal quokka, who normally whould be fair game but all efforts were made to avoid it as the cases of beer and bottles of port on the handlebars were far more precious.

Yeah, that was my first near-fatal bike crash.

I was returning from the only pub on the island with a carton of stubbies and a few bottles of port balanced precariously on the handlebars (and I had a few under the belt) when this suicidal quocka ran out from under a nearby house and went straight under my front wheel. I did my best to avoid the little bastard, but if I zigged, he zagged, and we ended up coming together in a squishy manner - as in my front wheel half squishing him.

As the front wheel went over the quocka, the carton and bottles of port lifted off my handlebars and everything seemed to slow down. I somehow managed to stay upright and collect both the carton and the port as they came down.

The quocka limped off, presumably to plan another suicidal assault on a passing drinker.

If I had returned to our house without the grog, my life would not have been worth living.