The SMH - a byword for accuracy

On a happy note, at the rate this cyclepath is being funded, our great-grand children may be able to ride from the Barents Sea to the Black Sea:

Twenty years after the fall of the Iron Curtain, a project to convert the former "death strip" into a cycling path is picking up speed. The new cycle trail, which will run 7000 km from the Barents Sea in the north to the Black Sea in the south, is aimed at promoting eco-tourism along the former militarized zone and tapping into booming interest in cycling holidays. Michael Cramer, a German Green party member of the European parliament, is spearheading the project to complete the trail, which is supported by former Soviet President Mikhail Gorbachev.

Given that this strip used to be sown with land-mines that blew up quite a few desperate easterners seeking to escape the dastardly clutches of communism, I think "booming" is not the best term to use to describe it. Unless the SMH also wants to describe the recent boat explosion off our north coast as a symbol of a "booming" trade in illegals.

Just one small problem with this story, which became obvious after visiting Michael Cramer's website:

"The Iron Curtain divided Europe for several decades. The memory of the separation of our continent – and the way it was overcome – can be preserved for future generations by the introduction of an 'Iron Curtain Trail', stretching in a 6,800 km 'green ribbon' from the Artic Sea to the Black Sea."

I even worked out the gist of that by looking at in Austrian:

My Austrian is a bit rusty - I'm sure that says something about being a jelly donut.

So where did the SMH find the extra 200km? Do they know something that the European Parliament doesn't know? Or did they just decide to alter the facts because '7000' sounds better than '6800'?

All the news that's fit to wrap fish in, and facts we just know we can trust. 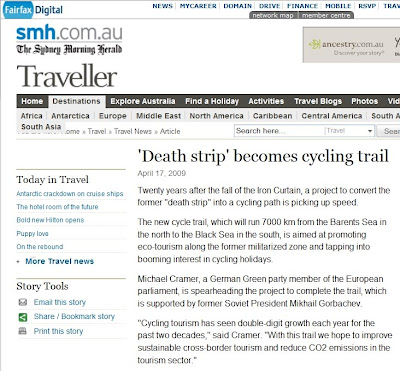