Since even Andrew Bolt has seen fit to comment on this crash and the horrible aftermath, I thought I'd arise from my sick bed and go and have a look. For starters, here is Burwood Rd. The woman in question left the park behind me and tore down this road, apparently reaching 150km/h before hitting a tree (although how anyone came up with that 150km/h statement is anyone's guess). That wouldn't be easy, given the number of roundabouts and chicanes on this stretch which are designed to stop you reaching 100km/h, let alone 150km/h. But judging by the utterly mangled wreck she left behind, she was certainly travelling way above the posted 50km/h limit.

I searched this section of road several times before finding what I believe to be the tree in question. Normally after a prang of any sort, there's bits and pieces left behind on the road - paint flakes, smashed plastic from bumpers, broken glass, even bits of metal. In this case, there was nothing - the scene had been swept totally clean. There was a bit of broken glass on the other side of the road (where I am standing in the next photo), but nothing around this tree.

The thing that gave it away in the end was the brand new sign, looking very shiny in this photo. A lot of the trees along here were missing bark, so it was not totally obvious at first glance that a car had in fact hit this tree. There are no gouge marks or broken branches - just a big patch of missing bark. 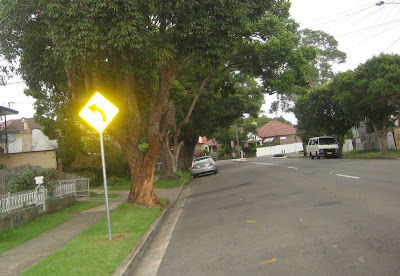 The amazing thing is the lack of skid marks. There are scuffs on the kerb where the car went over it, and a tyre track across the grass, but nothing on the road. The grass isn't even torn up, meaning that I doubt she braked at all. And this tree is well before the corner, which you can see up ahead. One of the comments at Bolt's said it was suicide, and I can't argue with that. 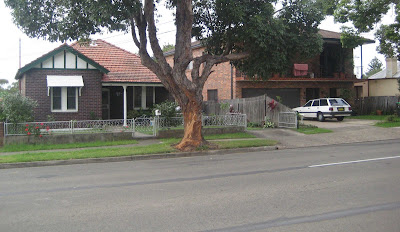 That must have been one hell of an argument to cause someone to want to run into this tree. The other thing that I was looking for when trying to find this spot was flowers.