I just want to say a big "Hello, and fuck you" to the fuck-headed driver of this silver car, registration ASN 22H. 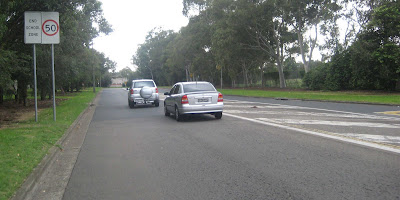 I was riding down Crane St in Concord, which leads into a sharp left hander at the bottom of the hill. The road is two marked lanes at the top of the hill, but it turns into a single lane as soon as you start down the hill - albeit a very wide lane (like in this photo). It's not uncommon for impatient and stupid drivers to ignore the fact that the road has become a single lane, and to try and undertake on the left.

I've had a few close calls on the corner in question when cars have tried to overtake me on the corner itself, which is dangerous as hell, so I normally push out into any traffic as I go down the hill and try to "dominate" my bit of road space so that no one can overtake when it gets hairy. The problem with overtaking on the corner is that cars tend to cut the corner, so if I am in the corner as they try to overtake, I get squeezed into the kerb.

It's not like I am crawling down the hill slowing down traffic either - I can happily hike down this hill at 50km/h and take the corner at 40 - and if a car tries to go around this corner at 40, they have to get in really tight, which is a problem for me if they are alongside me.

So in short, due to idiot drivers not knowing how to corner safely, I have to stick myself right out into the traffic to stay safe.

Which is what I did this morning, and the fuckface in this car still went around me, barely missing the concrete wall on her right and me on her left- and as soon as she got around the corner, she tried to overtake the car in front on a double white line! When she couldn't do that, she tailgated that car for the next mile.

So to the driver of ASN 22H, I shall re-arrange the letters of your numberplate to read "ANuS".
Badly proofread by Boy on a bike at Sunday, April 05, 2009

A friendly officer in the local police station, or a mate with contacts should be able to find out who this idiot is. A visit to his home with a tin of paint etc would be worth the trip.