The media has become so used to being told that electricity prices will have to rise to pay for carbon offsets and so on, it is blind to the pain that these increases inflict on working families.

Government-owned EnergyAustralia, Integral Energy and Country Energy have sought weekly rises - ranging from $1.80 to $2.50 - a week to fund the huge capital works program which will take five years.

The SMH tells us more:

The five-point plan also includes an $18 billion investment in electricity infrastructure across the state, the $800 million CityGrid project, a multi-million spend on protection equipment for the four main cables into the northern part of Sydney's CBD and a requirement for government buildings to make sure back-up power systems are working. Mr Macdonald said a third of the state's electricity infrastructure would be upgraded, replaced or renewed over the next five years under the plan.

The SMH, in their usual bloody-minded fashion, spun this story as the government getting tough on people that damage power cables! The bit about price rises that will slug the public was buried towards the end. They really have become the mouth piece of government.

Only News seem awake to this idea:

Increasing electricity prices to pay for infrastructure maintenance will raise controversy because the Government strips more than $1 billion a year from its energy companies in dividends and taxes.

Let's look at an audit report for 2008 on Integral Energy, one of the three government owned companies seeking a price rise.

Network reliability measures the number of minutes that customers on average are without electricity each year. Reliability has been steady over the last three years and remains within Integral’s target. Integral advised that factors affecting network reliability performance are largely external to the network and beyond mitigation through network management practices. Supply failure can result from adverse environmental conditions such as wind, lightning, rain, bushfires, defective equipment, loss of transmission supply, and vegetation coming into contact with powerlines and other assets.

Let me get this straight - the government is saying that $18 billion needs to be spent to improve network reliability, yet the latest audit report on Integral Energy says that reliability is within target and the factors affecting reliability are beyond mitigation!

More from the same report:

Total distributions to Government were better than target due to higher net profit. The decline in capital expenditure was primarily driven by expenditure on the network being $66.3 million below target.

Contributing factors to this included increased pressure on suppliers to meet demand from the New South Wales electricity industry and time delays resulting from increased community expectations with respect to environmental due diligence and consultation.

How much has the government extracted from Integral Energy via dividends over the last decade? Perhaps $1.5 billion or more? I can't be bothered sifting through all the past annual reports. If these capital works had to be performed, why has Treasury spent the last decade taking money out of this company instead of allowing it to re-invest it?

I suspect that most of this $18 billion spend that they announced is hot air - it has either been announced before, or is already part of the planned capital works for these companies. All the government is trying to do is to protect or increase its dividend (because it is broke) and using the "failed" network as an excuse to gouge more funds from the public.

Note the problems Integral had with spending last years capital program - nearly 20% of it was unspent due to environmental NIMBYS and other hangers-on slowing things down. So how are they to accelerate their capital program when the enviro-tards currently have one foot on the brake?

Let's have a look at the same report for EnergyAustralia:

EnergyAustralia reported no problems with spending their capital works budget, and notice how it has nearly doubled between 2005 and 2008 - they are already spending like gangbusters. EnergyAustralia have just over $7 billion in assets - I take it that is their valuation for the network. As they are spending just under $1 billion a year on capital works, either they are expanding their network like crazy (new homes and more capacity to existing suburbs) or they are replacing existing parts of the network like crazy.

Given that many of their assets probably have a life of 30 or 40 years, you'd expect their capital works program to assets ratio to be something in the order of 1:20, yet it is more like 1:7.

Energy use in New South Wales has increased at about 1,380 gigawatt hours (GWh) per annum over the past ten years. New South Wales has the largest summer peak demand in the National Electricity Market (NEM), with maximum summer demands forecast to increase by some 440 megawatts a year. In January 2008, TransGrid recorded a peak summer demand of 12,954 megawatts (13,458 megawatts in 2006-07). TransGrid has a $1.3 billion capital works program over its current five year regulatory period to 30 June 2009, to help it meet increasing demand. TransGrid expects to achieve its program.

We see the same pattern in TransGrid's dividend payments to government and capital works expenditure:

Another audit paper on the overview of the NSW electricity industry tells us this:

The 2007-08 Budget Papers show the Government is expecting annual revenue of around $1.1 billion over the next few years from electricity entities.

If you really want to know how hollow all the rhetoric about global warming is, have a look at this table (I could only grab a small section of it) - this shows all the new power plants that were proposed or being built at the time this report was written: 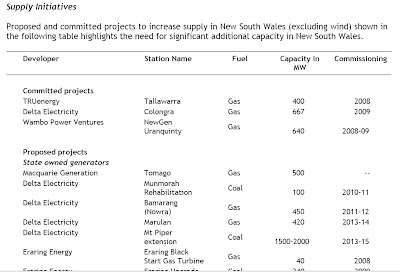 Then consider this quote on the next page:

the New South Wales Government’s Energy Savings Fund was established to provide $200 million over five years to fund projects that encourage energy savings, address peak demand, and increase public awareness and acceptance of the importance of energy saving measures. From September to October 2005 the Fund provided $15.0 million to 20 projects, saving an estimated 75,000 MWhs of electricity.

The second round of applications was held from September to November 2006 and a total of $13.0 million was allocated to 29 energy generation, efficiency and education projects, estimated to save 64,401 MWhs of electricity a year

In other words, these two rounds of "energy saving" projects, which "estimated" savings of 139,401MWhs only saved less than half of the potential output of the smallest power plant currently on the planning board.

Another way in how our money is sacrificed on the alter of green nihilism and feel-goodery.
Badly proofread by Boy on a bike at Monday, April 20, 2009

Next project, BOAB, look at how much the NSW govt is stripping out of state-owned water authorities in dividends and taxes, while proposing to land consumers with massive new price hikes for desalination and pipelines.