I can't even think of the word "basil" without Fawlty Towers popping into my head.

Today was P-Day for this year's basil crop: Pesto Day. I made my first real attempt to grow basil three years ago - that was an abject failure. The following year was no different. I would visit friends and wander around their gardens and marvel at the height and luxuriousness of their basil plants, and curse the pale, stunted, yellowish creatures that poked through the soil at our place. I'd be lucky to score one or two leaves large enough to drape over a single sliced tomato, and that would be it.

This year, things changed. I have no idea what I did differently, but wherever and whenever I planted basil, it flourished. In some locations, it flourished too much - instead of only 1 in 10 seeds germinating, they all did, and my failure to ruthlessly cull the plants at an early stage led to much unhealthy competition later on - and a seriously diminished crop.

The trigger for Pesto Day was the Dawn of the Slugs. Or perhaps even the Flight of the Caterpillars. I have, sorry, had basil in three locations in the garden until today. Two went untouched, whilst the third crop gave a good impression of having been chewed on by a goat. Not waiting for the slugs and bugs to make their way down to the other crops, and with the cold weather approaching, it was time to act.

First, strip the basil leaves and check for bugs and slugs. Only one caterpillar was detected. I prefer to get my protein via steaks and roasts, so he went down the sink. One third of my crop consists of one enormous plant on its own - the other two crops consisted of a dozen or more plants placed too closely together. Over half the leaves here came from half the enormous and lonely plant - the remainder came from chopping down 90% of the other two dozen plants. The big plant also had much larger and greener leaves, and the aroma it gave off when stripping the leaves was much more powerful. 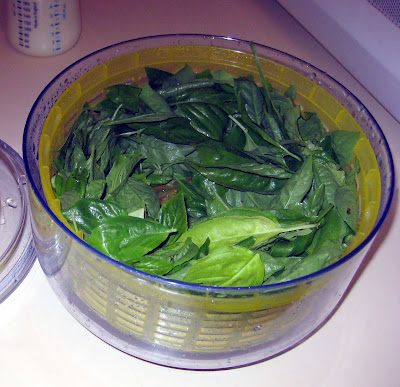 The recipe in my Stephanie Alexander cookbook called for one cup of basil leaves and 2 cloves of garlic. As I had a lot more than a cup of leaves, I went with three cloves. The effect was rather.... mindblowing. The first sample collided with the back of my mouth like an out of control semi-trailer with a Mini. Once I got over the shock of the initial jolt, I found it was quite good. Potent and overpowering, but good. Certainly enough to bring tears to your eyes. 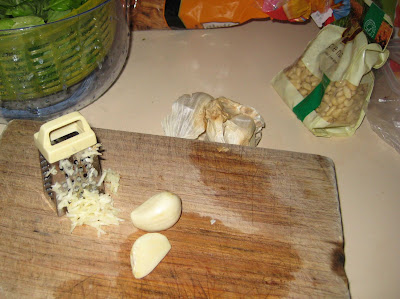 I didn't get to use proper parmigiana, as the local wog deli was strangely out of it. That almost never happens. I went with a close approximation which was still very good - not as bitey and tangy as your normal robust Parmesan, but nothing to sneeze at. Certainly 87 bazillion times better than that white powdery crap you can buy in a can. 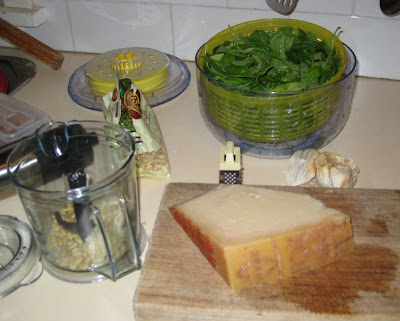 We now have enough pesto to last us a week, and the remaining plants could probably produce about the same amount before they kark it. It's certainly nothing like the anaemic stuff you get in the supermarket - although next time, I think I will stick to two small cloves of garlic, rather than 3 massive ones. I think I have burned holes in my cheeks.
Badly proofread by Boy on a bike at Thursday, April 16, 2009

Like you, a good basil crop still elludes us, but perhaps persistence is the clue. We are currently overrun with rocket with a flat leaf pasley crop coming through.

I have this sneaking suspicion it was a massive application of blood and bone at the start of the season (ie, the bag tore and about 10 times more than I wanted poured out). That, and daily watering.

Bullcrap, boy. I read in the NYT that there's no water in Australia.