I like to read Maralyn Parker's blog over at the Tele from time to time. If I am feeling a bit sleepy, it's great for raising the blood pressure and ire - and that helps ward off nap time. Maralyn has it in for anyone that dares to want to educate their children outside the state system, and will brook no adverse comments about the modern version of the Virgin Mary, now known as state school teachers.

The vibe that I get is that she detests those awful middle class types who want their children to succeed in life, for in her view, the only way they can succeed is if they stomp all over the heads of less fortunate kids. She rails against the stress that teachers are under, causing many of them to quit each year, but believes that a return of stricter disciplinary measures in schools is the equivalent of bringing back the iron maiden and stocks. She laments incentives being given to better performing teachers, but agrees with the modern philosophy of giving every kid a gold star, no matter how appalling their behaviours or performance.

She decries the dead hand of the state education bureaucracy and its deleterious effect on state schools, yet is horrified at the idea of giving state schools their independence and freedom - for that might lead some of them to fail! My goodness, imagine the catastrophe if a school failed! Car manufacturers can fail. Enormous multi-billion dollar banks can fail. Restaurants, furniture suppliers, car dealers, house builders, cafes, book stores, airlines, shipping companies, supermarkets, drycleaners, trucking companies, farms - these can all fail, and life carries on. We adapt, improvise, overcome. But if a school fails - merde! This has to be stopped at all costs!

Maralyn is constantly puzzled as to why some kids do well at school and others fail utterly. Oops, sorry. In her world, no child "fails". They may be unable to add 3+3, they may be unable to spell "CAT", they may think that Spain is a planet and that an amphibian is a form of punk rock band and that the First World War is the title of an X-Box game, but they have not "failed". Their learning outcomes may be lacking in certain categories, and their behaviours may fall short of departmental norms, but their report card will show that they got through with a mark of "non-negativised accomplishment criteria in a normalised comprehension assessment".

Here is my thought for the day on all this.

The weather today is fine but windy - warm enough for a T-shirt, but too windy to be pleasant to remain outside for any length of time. Therefore, I took Monkey to a nearby indoor play centre - it looks like this: 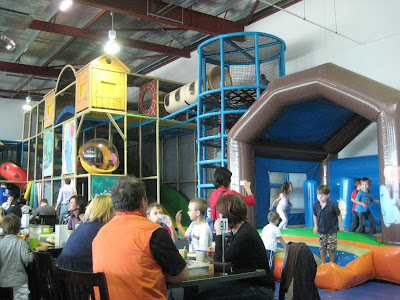 After 2 hours of jumping, running, climbing, sliding and doing bombies into the ball pit, Monkey was knackered. He is now snoring his head off through an afternoon nap. I am exhausted from just watching him. He climbed up to top of this thing countless times and then took the big slide down. He should be fit enough after that to do Kokoda.

The place was packed with families and kids - and get this. In the midst of a so-called obesity epidemic, I did not see a single fat kid there. Not even a slightly chubby kid. They were all lean and mean, even though half of them were wolfing down ice cream and popcorn - and I don't blame them for that. They needed the energy to keep going.

The parents who turned up here today and paid good money for their kids to run around are the sort that probably ensure that their kids get to run around every day, regardless of the weather. They don't plop them in front of the idiot box, pick up a fag and ring for a pizza. They take active steps to exercise them into the ground.

The kids in this photo may turn out to be the high achievers at whatever school they end up attending, because their parents presumably read to them every night, and are teaching them numbers and the alphabet and how to spell and write simple words, and are keeping them busy with activities like drawing and puzzles rather than watching 9 hours of cartoons each day. These are the parents who will sit down with their kids each night and ensure they do their homework, and that they pack all their books for school each day, and that they eat properly before school and have a good lunch, and who continue their education outside of school with extra-curricular sports and museum visits and language lessons and so on. The ultimate horror is that they may choose a non-state school for their kids. Parents like that deserve crucifixion in Maralyn's world.

And to Maralyn, that is some sort of middle class conspiracy. She probably hates the idea of Monkey turning up at school being able to read and write (like I did) - whatever will primary school teachers do if the kids can already read? And how dare I teach a child to do something - I am not properly qualified to teach Monkey to spell c-a-t. I might put foul thoughts in his head, like showing respect to elders and consideration for others and the sanctity of property rights and the importance of freedom and liberty and the idea of personal responsibility.

Yes, we are a bunch of middle class ingrates. Imagine, daring to usurp the right of the state to bring up our kids. We should just relax and wallow in a slough of mediocrity.
Badly proofread by Boy on a bike at Sunday, April 26, 2009

There seems to be a lot of that around these days - lefties arguing against private schools, I mean - the implication being that everyone should be educated at state schools, even if the results are far worse for those few who happen to be talented, or who happen to benefit from alternative, private education.